Is West Virginia the 45th Best State for Business?

CNBC’s rankings is one of several in a long line of business climate indexes, all of which fail to show any predictive value of economic growth. Instead, these rankings reflect the case for the policy positions advocated by the organization sponsoring the study, rather than policies that do create economic growth. Since it’s inception, West Virginia’s ranking has hovered in the mid 40s, from 44th in the first edition, to 45th in the latest.

The CNBC rankings are no different, with a methodology that is simply a grab bag of data, often from politicized sources. The CNBC rankings are derived from 10 categories. While some, like cost of living, are fairly straightforward, others like business friendliness are essentially meaningless, and rely on other arbitrary rankings as sources. The CNBC report cites rankings from the ultra conservative Cato Institute and Fraser Institute, indexes that reward states for low taxes, weak union membership, low or no minimum wage, as well as low levels of government spending including on health care and social security, but fail to predict any economic growth.

Overall, the CNBC rankings do show a correlation with job growth, but its mainly a self-fulfilling prophecy. One of the heaviest weighted categories is the economy, which includes GDP and job growth. So essentially, the CNBC rankings are saying the states that are good for business are ones with growing businesses, which is self evident. Notably, the relationship between the overall rankings and jobs growth is weaker than the economy category rankings and job growth, which suggests the rest of the rankings are missing out on what makes a state good for business.

Aside from the economy category, which again is self-fulfilling, the only category with a strong correlation with job growth was the access to capital category, which measured venture capital investments by state, as well as traditional bank financing for small and mid-sized businesses. But while this category had a decent correlation with job growth, it was one of the lightest weighted categories. 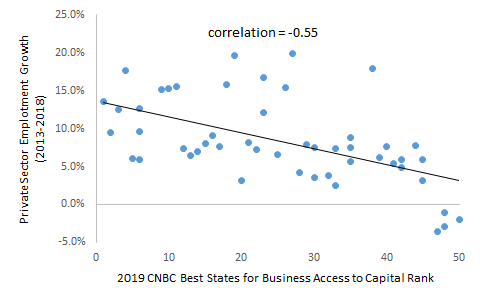 Other categories that should correlate strongly with job growth are tainted by unrelated ideological variables. For example, the workforce category includes the educational attainment of the workforce, a variable we know is strongly correlated with economic growth. But the category also penalized states for having high unionization rates and for not having right to work laws. Including these ideological points clouds the analysis, and results in a workforce category that isn’t as strongly correlated with job growth as it should be. 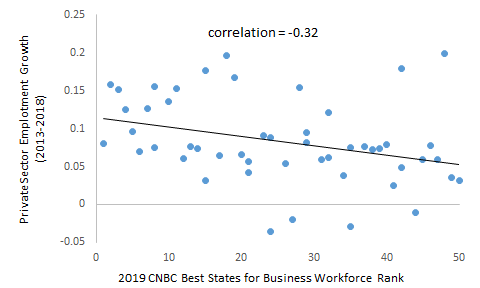 Most of the categories have almost no correlation to job growth. The cost of doing business category, which measure not how much business pay in taxes, but how “competitive” their tax system is, as measured by the Tax Foundation’s own arbitrary tax climate rankings, has a slight positive correlation and near zero correlation with job growth. The same is true for the business friendliness category, which purports to measure the legal and regulatory climate, and the amorphous “economic freedom” of a state.

Some of the categories can contradict each other. West Virginia has seen improvement in the cost of doing business ranking, as a series of corporate tax cuts has improved it’s so called “tax climate.” But those tax cuts have resulted in major cuts to higher education, a weakened PROMISE scholarship, and years of unstable state finances, which hurt the state in the workforce, education, infrastructure and economy categories.

Indexes like the CNBC Best States for Business are easily manipulated, and for every good piece of information they provide about a state’s economy, they include a meaningless and arbitrary one. When you don’t like the results of one, it’s easy to find another. Organizations like the Chamber of Commerce take credit when we improve, and ignore or cast blame when we decline. Overreacting to our rankings in these indexes, and trying to conform our policies to what they describe as “best,” isn’t going to have the outcome some might hope for.