Is the Recovery Losing Steam?

Friday morning’s news that there was no job growth in the month of August sent disappointment throughout the country, and stoked fears that another recession may be around the corner. The meager 17,000 private sector jobs added were offset by an equal loss of public sector workers, as state and local governments continued to make cutbacks.

A closer look at the CES data from the BLS shows that the recovery is indeed losing momentum, both nationally and in West Virginia. First let’s look at the national picture. 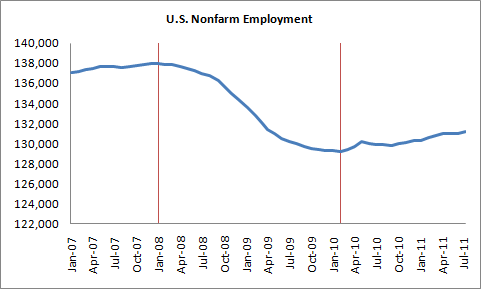 Since employment bottomed out in February 2010, employment in West Virginia has grown at a monthly rate of 0.09%; like the U.S., better growth than the 12 months before the recession. And like the U.S., growth in West Virginia began to speed up in the beginning of 2011, as the average monthly growth rate increased to 0.26% between January and April.

However, just like the national picture, that momentum has been quickly lost, as the average monthly rate of growth turned negative between April and July, at -0.16%.

At this point it is pretty clear that the recovery has stalled. Perhaps instead of a super-committee in Congress focused on budget cuts (which as we can see across the country, kills jobs), we can get one that focuses on job creation.