When we last talked about growing income inequality, the CBO had released a report showing that incomes for the richest households in the U.S. have been growing much faster than the incomes of the poor and middle class. Another study, this time from the Congressional Research Service (CRS), has confirmed that income inequality is on the rise in the U.S.

The CRS report looked at after tax income from 1996 to 2006, and the findings echoed the CBO report. On average, after tax income grew by 25% between 1996 and 2006, while low income families saw their incomes shrink, middle class incomes grew at half the rate of the average, and incomes at the very top nearly doubled. The figure below shows the change in income by quintile and for the top 1% and 0.1%, as well as the average income in each group.
Growth in Real After Tax Income by Income Group, 1996-2006 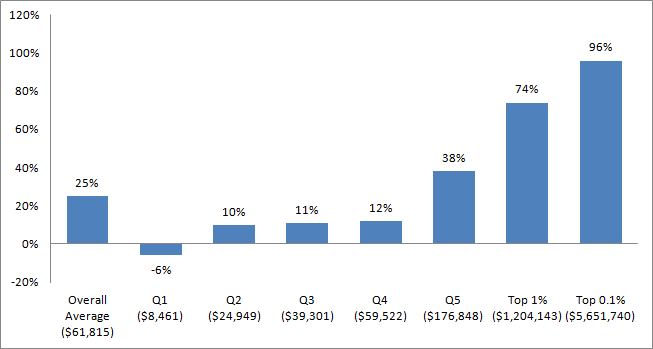 Source: Congressional Research Service
The CRS report also found that the tax system is doing less to alleviate inequality than in the past. While still progressive, the income tax system has grown less so since 1996. While the average effective tax rate fell from 23% to 20% between 1996 and 2006, it fell from 33% to 25% for the top 0.1%.
One explanation offered in the CRS report is that the rise in income inequality is due to the growth in capital gains and dividends income. Overall the share of income from capital gains in dividends grew from 10% to 14%, but it grew from 31% to 38% for the top 1%. For the bottom 80%, their share decreased from 1.4% to 0.7%. In addition, the tax rate on long term capital gains fell from 28% in 1996 to 15% in 2006, after the 2001 and 2003 Bush tax cuts, further creating after tax income inequality.
On the other hand, the share of income from wages and salaries fell, from 91% in 1996 to 79% in 2006. Yet for the the bottom 80%, their share of income from wages and salaries remained the same, at 82%. It was income earners at the top who saw their share of income from salaries and wages decline.
The data show a growing shift from labor income to capital income, with capital income much more concentrated at the top, contributing a great deal to income inequality. And while capital income grew, wages in the middle and bottom did not. Factors that kept wages from growing cited in the report include a declining real minimum wage affecting low income earners and declining unionization affecting middle income earners.
Equally as distressing as the growing income inequality are new reports that income mobility is lower in the U.S. than in other countries, with those born into poor households likely staying at the bottom of the ladder their while lives.