Indiana’s Medicaid Waiver Isn’t a Model for Other States

As state legislatures and officials around the country consider applying for Medicaid demonstration projects, or waivers, Indiana’s “Healthy Indiana Program 2.0” (HIP 2.0) is often touted as a more efficient way of delivering Medicaid services. But is it?

When Indiana adopted the Medicaid expansion in 2015, it did so through a Section 1115 waiver which requires most adults to pay monthly premiums and/or copays, with punitive lockouts for those who did not make their premium payments. In 2018, Indiana amended its waiver by adding an additional condition that adults who are unable to meet a work reporting requirement would lose their coverage.

Research on Indiana’s Medicaid waiver shows that its complexity and burdensome reporting requirements have resulted in poorer coverage for those who need it, higher costs for state administration, and increases in uncompensated care for providers.

The Healthy Indiana Program requires all non-elderly adult Medicaid beneficiaries (with the exception of the medically frail and pregnant women) to pay monthly premiums in order to receive their Medicaid coverage. Monthly premiums are tiered based on household income, which means individual beneficiaries pay anywhere from $1 per month to $20 per month.  Evaluations of the HIP program show that many beneficiaries have found these premiums to be unaffordable and burdensome. And the cost for failing to pay the premium is very high. Beneficiaries who do not make a premium payment within 60 days are disenrolled and locked out of coverage for six months. Additionally, the program imposes a 3-month lockout on recipients who fail to complete their eligibility renewal process within the allotted time.

After four years, HIP 2.0 has been in effect long enough to evaluate if it is meeting the objectives of 1115 demonstration waivers, which require a waiver program to improve the delivery of health care to low-income people, as compared to if the state adopted the  Medicaid expansion without a waiver.

An evaluation commissioned by the state found that 55 percent of people who owed premium payments didn’t make them. Those with incomes below the poverty line were moved to a less comprehensive plan, but nearly 60,000 Hoosiers, or 29 percent of enrollees, with incomes above the poverty line were completely disenrolled from coverage due to their failure to make a payment during their coverage period. Of those who missed their premium payments, three-quarters stated that the payment was unaffordable, they were confused about how to pay, or they didn’t understand that the premium was required. 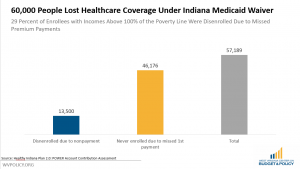 The burdens don’t just fall on the Medicaid beneficiaries. Administering such a complex plan also brings challenges and additional costs to the state. Indiana’s waiver plan includes multiple benefit levels, penalties for nonpayment of premiums that vary based on household income, and management of individual health accounts. Experiences across states have shown that program elements like premiums can be costly to administer. Simply put, Medicaid is more efficient and less costly to run without these complicated features.

State budgets and hospitals will also likely face ballooning health care costs and increases in uncompensated care under an Indiana-style program. Premiums, waiting periods, and coverage lockouts all have the effect of disrupting or delaying coverage for low-income individuals, which research has found often causes increased health care costs as people are forced to delay treatment and care. Emergency room use is also likely to increase in states that adopt this model, as individuals without coverage often have little choice but to turn to emergency rooms for non-emergency care.

As part of HIP 2.0 the federal government also allowed the state to waive retroactive coverage, which is an important backstop for providers and patients. Traditionally, programs allow Medicaid applicants to backdate their coverage up to 90 days prior to application, so long as they met the program requirements in that time. This is a vital protection for hospitals and providers, as uninsured individuals who are able to get retroactive coverage do not have their medical bills lost to uncompensated care. Indiana’s program removes the retroactive coverage protection except in the case of pregnant women.

In January 2019, Indiana amended HIP 2.0 by adding a new requirement for  beneficiaries that conditions their health coverage on meeting onerous work reporting requirements. When fully implemented, beneficiaries will be required to report at least 80 hours of work per month, and they must meet the work reporting requirement in at least 8 out of 12 months each year. If they fail to document their work hours, they will lose their health coverage.

Although the phase-in and grace periods make Indiana’s reporting requirements slightly less onerous than we’ve seen in other states like Arkansas where more than 18,000 lost their Medicaid coverage, they still add mounds of paperwork and red tape for Medicaid recipients to complete. Folks who meet work reporting requirements and those who qualify for exemptions must repeatedly prove that they do, month after month. This also places a significant cost on the state agency who evaluates eligibility, in West Virginia’s case the Department of Health and Human Resources (DHHR). An earlier report estimated that it would take 30 DHHR workers a full year to process the initial exemptions just forthe 70,000 West Virginians who’d qualify for exemptions as full-time students or caregivers.

And the program does nothing to address the barriers to work faced by those likely to be affected by these requirements- by providing no additional funding or support for child care, transportation, or phone and internet access. Indiana, like West Virginia, has many rural areas where jobs, volunteer opportunities, and broadband internet access are simply not available. A Medicaid recipient in Stroh, Indiana, has to travel a minimum of 32.7 miles to reach the nearest “Gateway to Work” organization for a volunteer opportunity to meet their reporting requirements, with no help with transportation or child care assistance.

Medicaid programs that institute complex systems of premiums, copays, and lockouts will lead to higher administrative costs for the state, coverage losses for those who can’t afford or don’t understand the requirements, and increased costs of uncompensated care for providers, research shows.

These complex programs also fail to account for the situations and characteristics of the people who are most likely to lose coverage. This population includes working people with unstable jobs who have no control over their work schedules or hours, individuals suffering with substance use disorders, people who face significant barriers to work such as lack of transportation, child care, or phone and internet access, and rural residents who live in labor surplus areas with few job opportunities. These are people for whom complex payment and lockout systems as well as work reporting requirements would present significant burdens.

The bottom line is that adding complexities and reporting requirements to Medicaid results in poorer coverage for those who need it, higher costs for state administration, and increases in uncompensated care for providers.