Mark Frank, an economist at Sam Houston State University, has used IRS records to put together state income inequality data from 1916 to 2005. The chart below shows West Virginia’s Gini Index for that time period. Remember, the Gini index varies between zero and one. A value of 1 indicates perfect inequality – where only one household has any income – and a zero value indicates perfect equality  –  where all households have equal income. So a higher Gini Index means greater inequality. 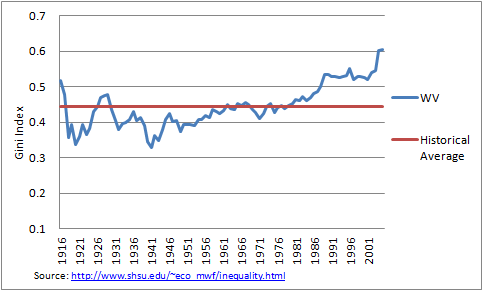 Income inequality has grown as more and more income is concentrated in the hands of the extremely wealthy. This next chart shows the share of total income held by the richest 10% of West Virginians. In the early 20th century, the top 10% in West Virginia had nearly half of the state’s income. However, between the 1930s and 1960s, their share held steady at between 25% and 30%, below the historical average of 32%. But their share began to grow in the 1980s, reaching 38% in 2005, meaning that 10% of West Virginians had 38% of the state’s income. 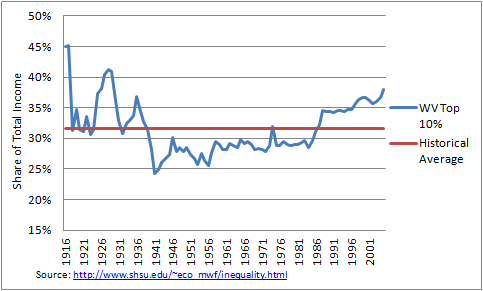 The growth in the share of income controlled by the wealthiest 1% in West Virginia is even more stark. Since 1916, the richest 1% of West Virginians have held an average of 9.7% of the state’s income. Like the top 10%, the share held by the top 1% was below the historical average for several decades, but began to rise in the late 1970s/early 1980s. It jumped dramatically in the 2000s, and was at 18.7% in 2005, nearly double the historical average. In 2005, the top 1% of the state held nearly one out of every five dollars. 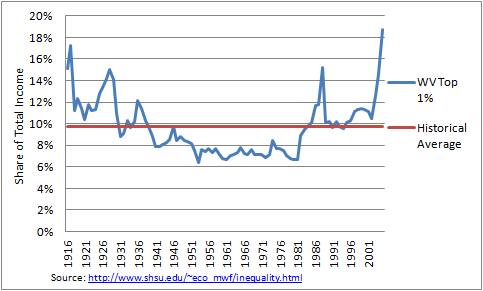 Like Ted mentioned, there is no silver bullet to address income inequality, but we clearly need to be doing more to create greater economic opportunity and mobility for all of West Virginia. A good place to start would be to increase the minimum wage, curb high-level rent-seeking, allow more people to join unions, and make the important public investments in infrastructure, education, and R&D that we know create good paying jobs.