Infrastructure is an important aspect of this country that is often taken for granted. Every family, community, and business relies on infrastructure to thrive. It is what connects people and goods across this nation. It can measure the quality of life enjoyed by millions.

As the Charleston Gazette reported this morning, the American Society for Civil Engineers (ASCE) has released a national report card grading the conditions and performance of the nation’s infrastructure. Overall, the United States has earned a D+ in infrastructure, a slight rise from the 2009 grade of D. The ASCE estimates that $3.6 trillion investment is needed by 2020 to “maintain a state of good repair.”

Infrastructure includes the roads, bridges, dams, levees, railroads, parks, schools, electrical grids, waterways, and waste that affect people daily. In West Virginia, many of these systems are in need of improvement. For example, the Mountain State operates 380 high-hazard dams and has a safety budget of only $624,729, ranking it 20th in the nation. Neighboring states Ohio and Kentucky are ranked 4th and 5th respectively. Pennsylvania is 2nd with a safety budget of $2,502,295.

West Virginia’s roads and bridges are also in need of repair. More than one in three bridges (35.9 percent) is “structurally deficient” or “functionally obsolete.” Reports have ranked West Virginia’s bridges 8th worst in the country in terms of overall condition. Almost half (47 percent) of the roads are in poor or mediocre condition. West Virginia motorists lose approximately $372 million a year in vehicle repairs and operating costs on these roads. It would cost $779,713,543 for the state to repair or replace deficient highway bridges.

Advocacy groups believe that investing in infrastructure cannot only repair crumbling roads and bridges, but also promote much-needed job growth in West Virginia. Additionally, a study from the Political Economy Research Institute (PERI) states that infrastructure investments made by the federal government can create 18,000 jobs per billion dollars. With a 7.3 percent unemployment rate, more jobs created by infrastructure could be a real boost to the state economy. These jobs would be increasingly important since many do not require a college degree. About 41.6 percent of West Virginians would be eligible to obtain such employment.

Investment in infrastructure has steadily declined in West Virginia in terms of capital expenditures for new construction of roads and bridges. State budgets indicate that capital expenditures from the Division of Highways are at a five-year low. During Fiscal Year 2009-2010, West Virginia spent $1.04 billion on new infrastructure–$807 million on roads and $223 million on bridges. Fiscal Year 2013-2014 shows a sharp decline. Only $586 million is allocated for infrastructure–$381 million for roads and $204 million for bridges. 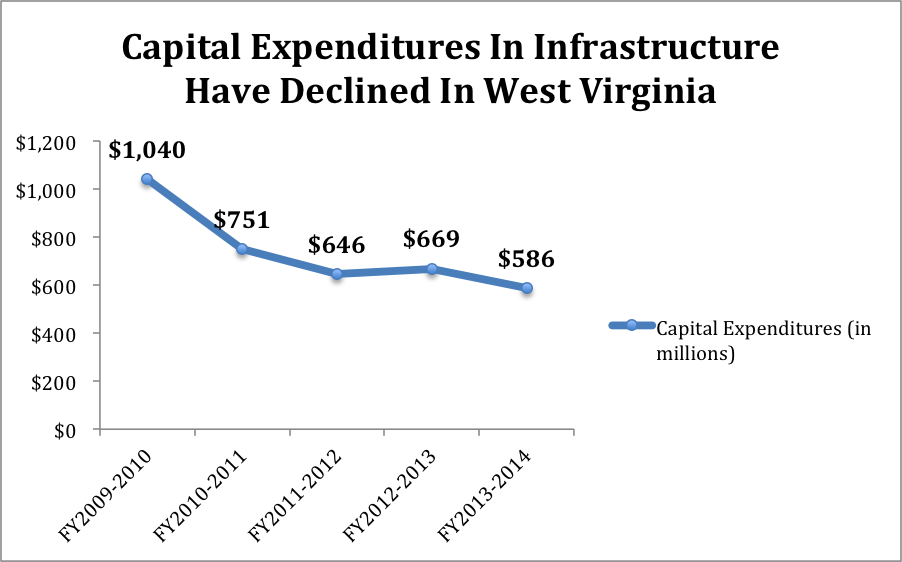 Further investment into state infrastructure, whether new or repairs, could provide jobs to West Virginians looking for work today. Having a healthy, functioning infrastructure helps drive the economy and improves quality of life. For businesses to be competitive, goods and services must be able to be transported efficiently and economically. A working infrastructure system is key to prosperity.