Blog Posts > If You Like Your Health Plan, You Can Keep It…Seriously
November 8, 2013
WVCBP

If You Like Your Health Plan, You Can Keep It…Seriously

The news headlines have been dominated recently about people who have had their health insurance plans cancelled and opponents of the Affordable Care Act are using it to attack the law. Let’s ignore the rhetoric for a moment though and take a look at the facts and what it means for us as West Virginians. Spoiler alert! 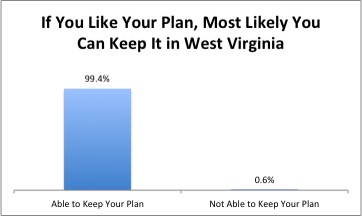 As small as the individual market is in this state, it is also dominated by just a couple of insurers. Data from the Kaiser Family Foundation estimate that the largest insurer, Highmark Blue Cross Blue Shield, made up about 44 percent of the market in 2011.  The second-largest insurer on the individual market that year was UnitedHealth Group, with 23 percent of the market share, which means that the two largest insurance providers controlled two-thirds of the whole market.

I tried reaching out to both of these companies to see how many policies they had to cancel.*  I got in touch by email with a spokeswoman from Highmark who told me: “Highmark West Virginia is not discontinuing any policies in WV.  Individuals can choose to stay on their current coverage until Dec. 31, 2014 or they can choose a new plan from the exchange.”

I also spoke to a representative at the West Virginia Offices of the Insurance Commissioner who told me that they’ve received notices for discontinuation of around 8,800 covered lives with almost all of those (8,600) from Highmark beginning next year in 2014.  Essentially, Highmark is giving everyone an opportunity to keep their current plan for at least one more year before that plan will be discontinued.

That means that for this year, only about 200 people across the state will have their health insurance policy discontinued.  Even if we include the 8,600 people from Highmark who will not be able to renew their policy next year, it means that 99.4 percent of West Virginians who want to keep their current health plan can do just that.

Of course, here in West by God we care about every last West Virginian, so what about those in the 0.6 percent who will have to find new coverage by the end of 2014?  I think a press release from Highmark BCBS of Pennsylvania sums it up best:

These individuals will benefit from having a new health-care reform compliant plan because it will have additional essential health benefits, and the plans, in almost all cases, will be lower priced.

*UnitedHealth did not return my calls or emails