Once again it looks like another year will go by without an increase in the state tobacco tax. This year it is quite surprising though as West Virginia is facing a severe budget crisis and raising tobacco taxes would essentially fix it all in one fell swoop. Nevertheless, our legislators seem intent on using our emergency savings fund rather than risk their political futures by raising taxes during an election year. Sigh.

What people may be surprised to hear is just how much our taxpayer dollars are subsidizing cigarette prices. Knowing this, perhaps even more people would support raising tobacco taxes, an item that already polls pretty well in West Virginia.

While we are not directly using tax dollars to lower cigarette prices, the simple fact is that smoking causes hundreds of millions of dollars in excess health care costs every year in West Virginia, and a significant portion of those costs are paid for by taxpayer-funded health insurance programs like Medicaid and Medicare and through direct hospital assistance payments.

Tobacco use causes $690 million in direct health expenditures every single year in West Virginia, $229 million of which is spent by the state Medicaid program, according to estimates from the Campaign for Tobacco-Free Kids.  Every pack of cigarettes sold in West Virginia, therefore, results in an additional $8.93 of health care costs. Yet, West Virginia only brought in $107 million in tobacco tax revenue in 2013. This means that West Virginia is spending over $120 million more on tobacco-related health care costs, in Medicaid alone, than the state receives in tobacco taxes! (Figure 1)  Coincidentally, that is pretty close to the amount of increased revenue that the state Budget Office projected would result by passing House Bill 4191 ($134.8 million to be exact). Meanwhile, the Senate version (SB534) would dedicate the entirety of the increase to the Medicaid Trust Fund for the next two years, which happens to be about $35 million more than is needed to close the Medicaid budget gap for FY15 without tapping the Rainy Day funds for $84 million as the governor has proposed. 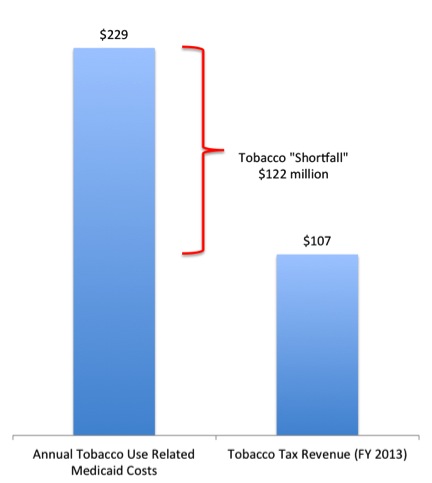 To put it another way, a $5 pack of cigarettes actually costs nearly $14 at the end of the day, a hefty chunk paid with your state tax dollars. How many fewer smokers would there be, and therefore millions of dollars less that West Virginia would spend on preventable health care, if cigarettes cost $14 a pack?

So the next time someone in front of you at your local convenience store asks for a pack of Marlboro Reds, be sure to tell them, “You’re welcome.”

What about declining revenue?

Tobacco taxes are designed to decline over time, but they still generate surprisingly stable revenue.  First, since the whole point of raising tobacco taxes is to reduce the number of people who use it, it is expected that tobacco sales will drop as more people quit and fewer youth start. Secondly, cigarette taxes are calculated on a per-pack basis meaning that the yield per pack will stay the same even as inflation drives overall prices of consumer goods up. The lesson is that states should not depend on tobacco taxes to fund programs over the long-term since revenues will not keep pace with growth, however, they can be successful policy tools to reduce smoking-related costs in the future while providing a stable source of additional revenue in the short-term (Figure 2). Case in point, the increased revenue created by passing either HB4191 or SB534 would be sufficient to bridge the Medicaid budget gap for at least the next three fiscal years, giving the state more time to recover economically or find alternative solutions rather than tapping our emergency savings fund.

Also, it’s worth noting that four of our five neighbors currently have higher tobacco taxes than we do, while Pennsylvania and Maryland still would even after a full dollar increase in our state’s cigarette tax. 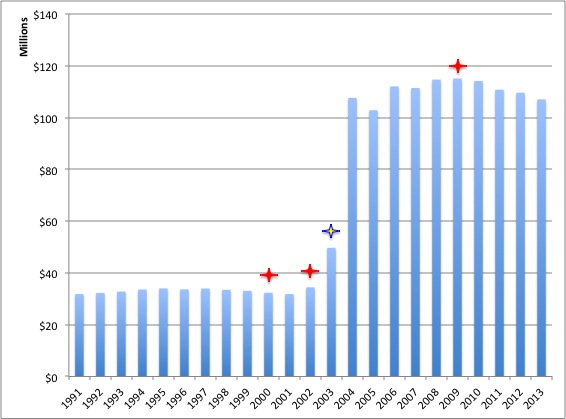