Blog Posts > How Many Jobs Could the AHCA Cost West Virginia?
April 7, 2017
WVCBP

How Many Jobs Could the AHCA Cost West Virginia?

A recent report from the Economic Policy Institute looks at how many jobs could be lost in each state under the Republican health bill – the American Health Care Act. The AHCA – which would repeal the Affordable Care Act (ACA) – is like a zombie – it just does not seem to quite die.

Yet every attempt to bring it forward for a vote in the House has failed as many moderate Republicans remain nervous about the impact the legislation will have back home. And for good reason. Nonetheless, an effort by leadership and President Trump to regroup and hold a vote in the house over the next month in underway.

What would the Republican repeal bill mean for health insurance coverage in West Virginia?

– More than 800,000 West Virginians would be at risk of losing their health insurance coverage or face exorbitant premiums for a plan that does not cover pre-existing conditions.

– West Virginia would face a $4 billion cut in federal funding for the Medicaid program over 10 years (2019 to 2028), effectively shifting those costs to the state.

Federal cuts of this magnitude will force West Virginia to cut children, seniors, people who need long-term care, people with disabilities, and struggling low-income workers from the Medicaid program, as well as cut critical health services, and cut payments to hospitals, doctors, and other providers. 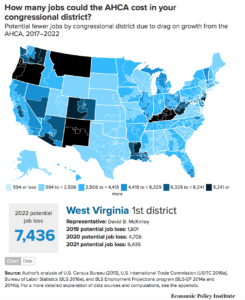 What would the bill mean for jobs in West Virginia? Nearly 23,000 jobs would be at risk in West Virginia by 2022. West Virginia would be in the top five states with the largest reduction in job growth as a share of the total employed population – a 1.45 percent average annual job less. 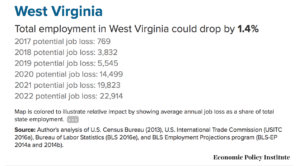 The Affordable Care Act resulted in billions of federal dollars flowing into West Virginia. With the ACA Medicaid expansion in 2014, the new federal dollars constitute the single most important economic stimulus package for this state in recent memory, creating jobs, boosting our economy, and supporting our rural hospitals and health-care providers. The health-care sector is one of the few sectors in West Virginia that has seen job growth in the last five years.

These health and economic security gains of West Virginia families would be at risk if Washington revives an ACA repeal effort. No state has more to lose than West Virginia if this zombie bill arises again.