The recent defeat of Kanawha County’s proposed education excess levy has put the spotlight on property taxes, creating an opportunity to discuss how West Virginia’s property taxes compare to the rest of the country. While adding up the number of specific levy rates is a poor way to measure tax burdens, actually comparing property taxes between states can be complicated. Rates are expressed in different ways (in West Virginia they are expressed as cents per $100 of assessed value), property can be valued differently (West Virginia assesses property at 60% of its market value), and not all states tax the same property (West Virginia taxes both real and personal property). With that in mind, let’s try to make some comparisons.

While measuring property taxes on a per capita basis tells us about the taxes paid by individuals, it doesn’t exactly tell us about whose property taxes are the highest, in the sense of who has the highest property tax rates. For example, a state with high property tax rates might not rank highly on a per capita basis, because those high rates could be being applied to low property values, which wouldn’t bring in much revenue. To get at that question, we can try to measure effective rates, by dividing total property tax revenue collected by the total value of all property. However, measuring the total value of property in a state is harder than it sounds. Fortunately the New England Public Policy Center did it for us in 2002.

When it comes to overall effective property tax rates (property tax revenue as a percent of total property value), West Virginia ranked 37th lowest among the 50 states at 1.09%. This was 18 percent lower than the national average. And, as it turns out, per capita rankings align pretty closely with effective rate rankings, meaning that measuring property taxes per capita does a reasonably good job of telling us which states actually do have high rates. 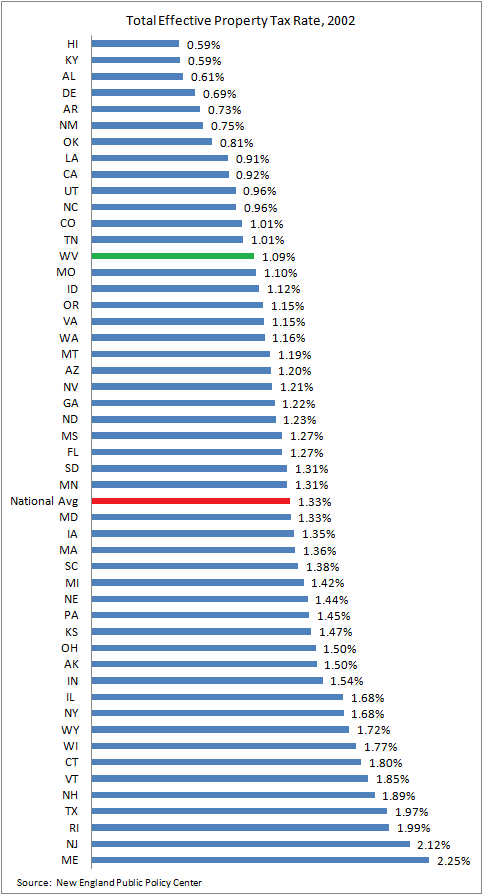 Yet another way to compare property taxes is to take a hypothetical piece of property, and apply each state’s tax system to it. That is what the Lincoln Land Institute did for its comparison study. For example, for a $150,000 home, West Virginia ranks 48th lowest  (note: the Lincoln Land Institute study uses two rates for NY and IL, because of dramatic difference in taxation within those states, so the ranks are out of 53, including D.C.) at 0.74%. This was 44 percent lower than the national average of 1.2 percent.

When it comes to commercial property, with $1 million in property and $200,000 in fixtures, West Virginia ranks 31st lowest at 1.64% or 16 percent lower than the national average. It’s not surprising that West Virginia ranks higher on this measure, since a number of states do not tax business personal property. 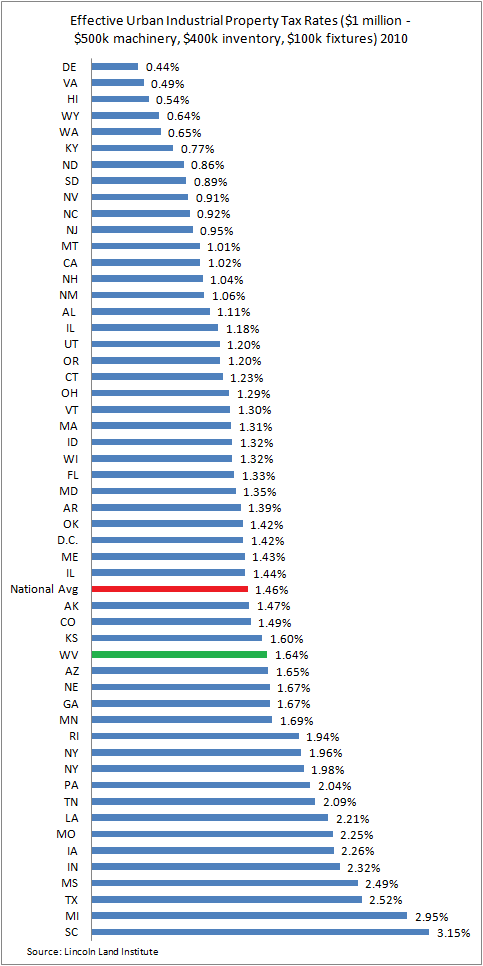 No matter which way you slice it, West Virginia’s property taxes are below average, unless you are a natural gas driller with several hundred thousand dollars in equipment. And even then, you are still paying less here than in a state like Texas, which also has a large energy industry. But for everyone else, West Virginia’s property taxes are pretty low.