The recent Republican proposal in the U.S. House of Representatives to cut current-year (2011) non-security discretionary funding by 13.8 percent would slash many highly effective programs that provide services to thousands in West Virginia.

Over 1,300 at-risk children up to age 5 in West Virginia could lose education, health, nutrition and other services under Head Start, while 61,000 college students in the state would be affected by a reduction in Pell Grants. The proposal would also end a program that helps low-income families weatherize their homes and permanently reduce their home energy bills, cut federal funds for employment and training services for jobless workers and for clean water and safe drinking water by more than half, and raise the risk that the WIC nutrition program may not be able to serve all eligible low-income women, infants, and children under age 5. In addition, it would cut funds for the Centers for Disease Control and Prevention by 22 percent, for the Food and Drug Administration by 10 percent, and for the Food Safety Inspection Service by 9 percent. Overall the proposal would reduce non-security discretionary funding for 2011 below current funding by $64 billion.

More than a third of fiscal year 2011 (which began last October 1) has elapsed, but Congress has not yet enacted full-year appropriations. The continuing resolution currently funding government activity expires on March 4th.

Despite the claim that the GOP proposal returns funding to the “pre-bailout, pre-stimulus” level of 2008, there is no current discretionary funding for bailouts or stimulus that Congress can cut to achieve the reductions proposed by House Republican leaders. Instead, the proposed cuts threaten the ability of federal programs to meet important needs in West Virginia and throughout the country.

The  below table shows the impact for West Virginia in fiscal year 2011. The estimates are based on an analysis  by the Center on Budget and Policy Priorities. 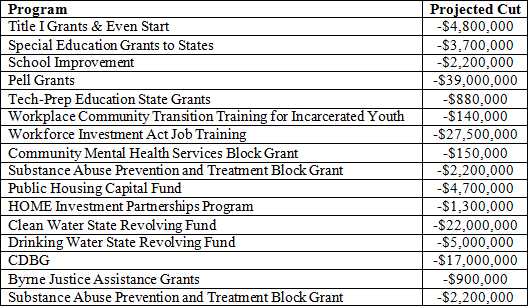 These cuts put the burden of deficit reduction on the backs of West Virginia’s most vulnerable citizens. Investments in early and higher education, workforce training, community development, and a clean environment all help ensure a prosperous future. And they are far more effective than the billions spent to provide tax cuts for the most affluent 2 percent of Americans that passed just two months ago.