Help Us Reach 500 and Much More

What Do Immigration and Health Care Reform Mean to West Virginia?

The fall-out from the Obama administration’s decision to delay the employer mandate continued in the media this week. Brandon’s blog post pointed out that those saying the delays are a sign the ACA is seriously flawed are the same people who have been trying to derail the bill from the beginning, and, in the end, the delays will impact few West Virginia employers.

Medicaid expansion in West Virginia will make health care available for many who are currently uninsured. Another way to make the state healthier? Reduce the number of high school drop outs. Read more in Brandon’s blog post on how the state could save tens of millions of dollars each year in health care costs by investing in education.

Immigration reform is also all over the headlines. If West Virginia’s undocumented workers were to gain legal status, they would contribute more in state and local taxes and income taxes to the tune of $1.2 million. Read more in Sean’s blog post.

The WVCBP was mentioned in a State Journal article this week in its coverage on the doubling of student loan interest rates. As we reported, West Virginia graduates have an average debt of $25,000, higher than the national average.

Ted Boettner was mentioned in Phil Kabler’s Sunday Gazette-Mail column‘s discussion about the hole in the state budget which coincidentally enough matches up with recent tax cuts. Who knew?

West Virginia’s undocumented workers are already paying taxes and contributing to the state’s economy. Under immigration reform, they would contribute even more as Sean explained in a WV Public News story today.

On Monday, Fiscal Policy Analyst Sean O’Leary presented survey results on how West Virginia legislators view the state’s fiscal note process. A majority of the legislators who responded find problems with fiscal notes, from their accuracy to the inconsistent way they are compiled. Look for a WVCBP issue brief with the full results next month. 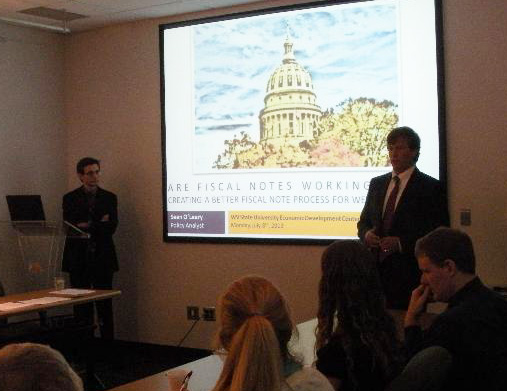