Healthcare.gov is Dysfunctional. West Virginia Could Have Done it Better 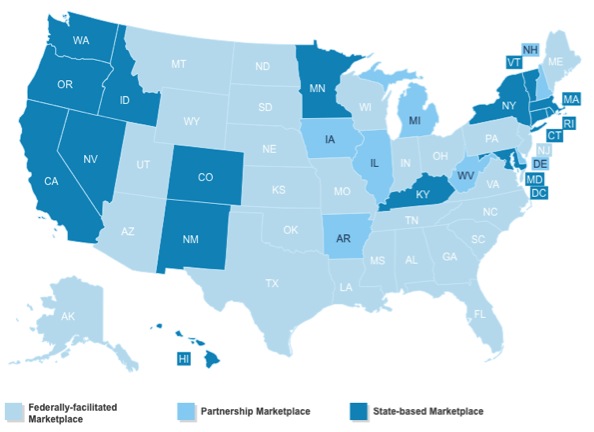 Almost all of the success in the Obamacare roll out to date has occurred in the dark blue states. Note, West Virginia is not dark blue.

On the very same day that the federal government shutdown a few weeks ago, the Obamacare online Marketplace, www.healthcare.gov, went live.  That the shutdown stole the headlines might have been a very good thing for supporters of the health law, considering that the roll out of the Marketplace has been anything but smooth.  The site was so overwhelmed with web traffic in the beginning that very few people were able to shop for, much less purchase, health insurance.  The site was also found to have a host of glitches on the back end as well, which has only been exacerbated by the demand.  In short, it’s pretty much been a disaster.  On the other hand, state-run exchanges in places like Kentucky, New York and Connecticut have hit the ground running, enrolling tens of thousands of their residents in new insurance plans.  The lesson?  West Virginia should follow their lead and begin planning now for its own state exchange in 2015.

When the Affordable Care Act was first passed in 2010, West Virginia became one of the first states in the country to pass legislation to pursue the creation of a state-run insurance exchange.  For a whole host of reasons (understaffing, underfunding, and good old fashioned politicking just to name a few), the goal of state-run exchange fell by the wayside and was replaced with a federal-state partnership exchange.  Essentially, this meant that the federal government would bear the burden of operating the West Virginia insurance exchange on the same website as it was running the other 36 Marketplaces in states which opted not to pursue their own exchange.

The West Virginia Offices of the Insurance Commissioner won’t be releasing information on the number of applications we’ve had in West Virginia until the feds release their numbers in November.  However, there’s no doubt that the problems healthcare.gov has had across the country have hampered those in West Virginia who want to shop for health insurance and compare plans.  Meanwhile, many of the other states who did create their own exchanges have been releasing their numbers and the news is overwhelmingly positive.  For example, in its first three weeks, the exchange in Kentucky called KYnect has had over 32,000 applications completed.

Hindsight is 20/20, but it’s obvious the problems with the healthcare.gov website today could have been avoided in West Virginia had we stuck it out and created our own exchange.  Doing so would have had loads of other benefits, as well, including millions of more dollars in federal funding and much more flexibility in creating a product that would meet the needs of West Virginians.

The good news is that it is not too late to move forward with the creation of our own exchange.  While chances are that the feds will work out the glitches in healthcare.gov in the coming months and shopping or purchasing insurance will be much easier down the road, there should be little doubt that West Virginia can create a Marketplace better suited to the needs of West Virginians than a cookie-cutter federal approach.