Earlier today, Delegate Patrick Lane issued a press release calling for more budget cuts as the solution to West Virginia’s budget gap. As part of his argument, Delegate Lane made the misleading claim that the state’s general revenue fund has grown by $564 million in 5 years, which is a reflection of “unchecked” government spending.

However, Delegate Lane’s math only works by carefully choosing particular years to compare, and ignoring their context. In reality, General Revenue, and base budget spending is down nearly across the board, which shouldn’t be surprising after multiple years of budget cuts.

As seen in this chart from his Twitter page, Delegate Lane is comparing General Revenue Spending from FY 2010 to FY 2015. And the chart does show a General Revenue Fund increase of $564 million, from $3.74 billion in FY 2010 to $4.31 billion in FY 2017. But FY 2010 (and FY 2011) were unusual budget years. During the recession, states, West Virginia included, received an infusion of cash from the federal government from the Recovery Act, which they used to prevent budget cuts and back fill their budgets. West Virginia was no different. In those years, the legislature made large cuts to the General Revenue budget, and “backfilled” it with federal stabilization funds. 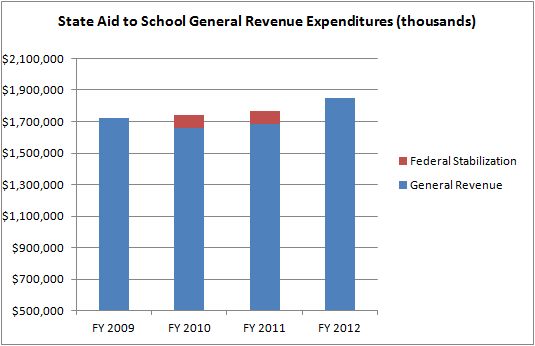 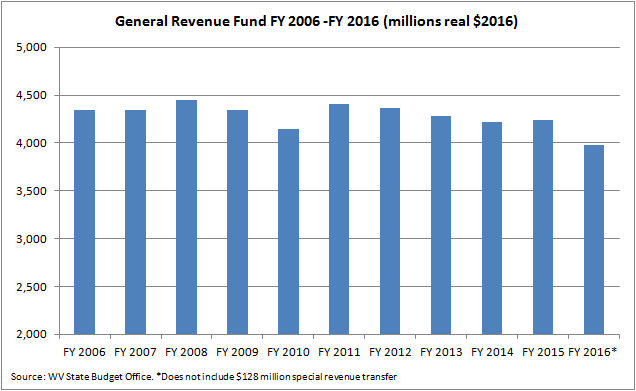 In addition, during those years, the Federal Match Rate for Medicaid increased as part the federal government’s efforts to aid states. West Virginia was allotted over $500 million in extra federal funding for Medicaid from FY 2009 to FY 2011, allowing even further General Revenue reductions. In total, West Virginia was able to cut the budget by $322.7 million in FY 2010 and $183.2 million in FY 2011, and replace it with federal ARRA funds.

By FY 2012, the federal stabilization funds were mostly exhausted, and the state’s budget was back to normal. And most of the $564 million increase happened between FY 2010 and FY 2012. But it wasn’t due to the state’s budget growing out of control, it was due to the rollback of federal stimulus money. Including the backfill stimulus money, the general revenue fund increased by $241 million, less than half of Delegate Lane’s $564 million figure. That’s a five-year increase of only 5.9%, which is not very remarkable. According to the Bureau of Economic Analysis, total state and local government expenditures have grown an at average annual rate of 4.5% per year since 2000.

And in the five years since the expiration of the stimulus funds, the state’s General Revenue budget has hardly grown at all. Compared to FY 2012, spending in Governor Tomblin’s FY 2017 proposal is down nearly across the board, with the only increases coming from the Supreme Court, Medicaid, and Senior Services, which wasn’t funded from General Revenue in FY 2012. Overall General Revenue has only increased by $184 million from FY 2012 to FY 2017, an increase of only 4.4 percent over 5 years. That’s less than one percent a year, well below inflation. 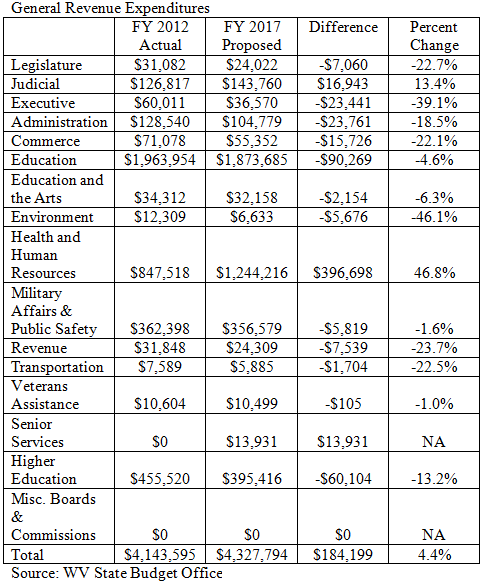 In fact, when considering the whole base budget, the increase over the past five years is even smaller, at just $115 million, or 2.5%, as lottery revenues have also declined.

So in short, Delegate Lane’s claim that the state budget has experienced unchecked growth of $564 million is only true by picking a starting point when the General Revenue Fund was artificially low. When federal stabilization funds are accounted for, the budget’s growth over that time is pretty unremarkable. And since then, nearly every area of the budget has gone down substantially.