Most agree that the Great Recession began in late 2007, but we’re a little behind in West Virginia. When it comes to jobs, the recession began to affect West Virginia in October of 2008. Between October 2008 and January 2010, West Virginia’s economy lost 32,400 jobs. Since then, the state has slowly added 11,600 jobs. So, at least when it comes job creation, things seem to be improving, albeit not enough to have an effect the unemployment rate. 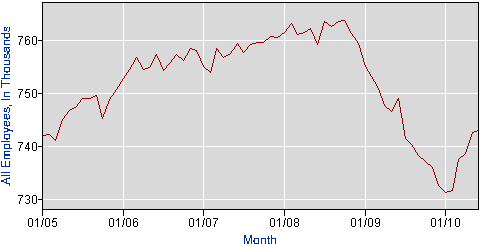 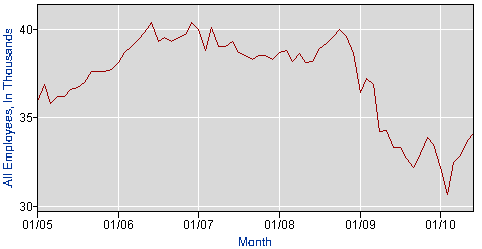 Since bottoming out earlier this year, about 2,000 construction jobs have been added to the economy. The same is not true however, for manufacturing jobs.
Total manufacturing employment, WV – Source BLS 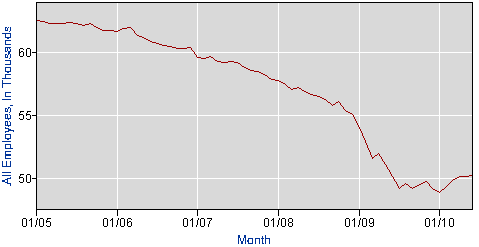 Manufacturing jobs were already on the decline, the recession only accelerated the loss. A similar graph can be made with employment in non durable goods. 1,400 non durable goods producing jobs were lost between October 2008 and January 2010, but it was really just a continuation of a long trend.
So what does this all mean? Many of the jobs West Virginia lost in the recession may not be coming back. Manufacturing and non durable goods production represented over a quarter of the jobs lost in the recession. But both these sectors have been steadily losing jobs for over a decade.  They are probably not ever going to recover to pre-recession levels. And since a quarter of the jobs lost aren’t likely to bounce back, this means we are in for a long, slow recovery. And in order for that recovery to happen, we will need a fundamental change in the structure of the state’s economy.