Governor Justice held a press conference Monday, where he laid out an alternative plan to closing the state’s $497 million FY 2018 budget gap. It revises the plan in the Governor’s proposed FY 2018 Executive Budget, by reducing the proposed increases in sales and business taxes, while calling for higher taxes on tobacco and sugar-sweetened beverages.

On the expenditure side, the governor made few changes from the original plan of $26 million in targeted cuts, including cuts to WVU, Marshall University, and the Education Broadcast Authority. With his revised plan, the governor proposed spreading out appropriations to his Save Our State (“SOS”) fund over three years, reducing the impact on the FY 2018 budget by $70 million. He also proposed “smoothing” the annual required contribution for the teachers’ retirement system, which would reduce the state’s payment in the FY 2018 budget by $40.75 million. The governor also noted that he would be open to further cuts of up to $50 million total, but left it to the legislature to identify where to make them.

On the revenue side, there are some significant changes. To recap, in his original FY 2018 budget proposal, Governor Justice proposed raising $450 million in new revenue to help close the budget gap. This included increasing the sales tax from 6.0% to 6.5% as well as broadening the sales tax base to include professional and advertising services. The proposal also included increases to the beer barrel and wholesale liquor taxes. The governor also proposed a new Commercial Activity Tax of 0.2% on businesses.

In his revised plan, the governor proposed a smaller increase in the sales tax, from 6.0% to 6.25%, while still broadening the base to include professional services, but not advertising services. He also proposed a smaller Commercial Activity Tax of 0.075% instead of 0.2%. The governor’s revised proposal keeps the increases on the beer barrel and wholesale liquor taxes, and also increases the tax on sugary drinks and cigarettes, as part of a “Better Health Initiative for WV.” Finally, the governor proposed a new high-income surcharge of $500 for annual incomes above $200,000, $750 for incomes above $250,000, and $1,000 for incomes above $300,000. 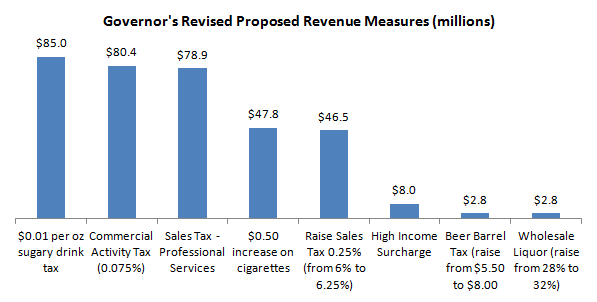 Presumably still on the table is the governor’s alternative budget that spells out the spending cuts needed to balance the budget absent any new revenue. This includes major cuts to higher education, including closing several colleges, eliminating the PROMISE scholarship program, and eliminating state funding to Senior Services, public libraries, Veterans’ Assistance, and Education and the Arts, among other cuts.