Government plays key role in keeping people out of poverty

Approximately one in seven West Virginians found themselves in poverty during the recession years of 2008 and 2009. This number would have been even higher without crucial assistance from government programs (Figure 1).

Figure 1. West Virginians in poverty with and without government programs 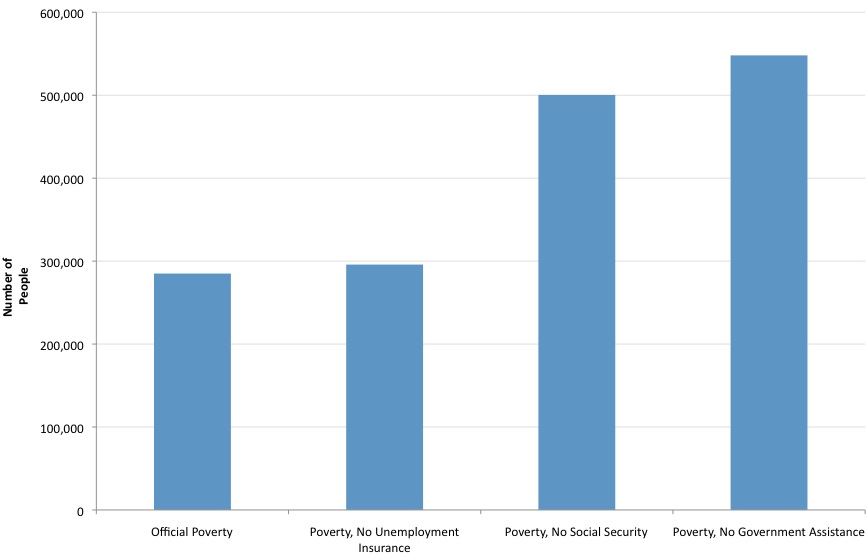 If West Virginia families had relied solely on their own resources and on assistance from their employer, relatives and friends, or non-governmental agencies, twice as many people – an additional 272,000 people – would have been in poverty. Without governmental aid, three in ten West Virginians would have found themselves below the poverty line.

Two programs in particular proved to be the greatest anti-poverty tools. Social Security had the largest effect, keeping nearly 217,000 people out of poverty. This roughly equals the combined population of Charleston, Huntington, Morgantown (including students), Wheeling, and Parkersburg! The effectiveness of this program might be dampened in 2010 and 2011, because benefits will not increase by a cost of living allowance.

Unemployment insurance also played a key role in keeping many West Virginians out of poverty. As joblessness rose in the state, more unemployed workers qualified for assistance. In addition, provisions in the Recovery Act that increased weekly benefits and weeks of benefit coverage made unemployment insurance an even more effective anti-poverty program. Without these jobless benefits, an additional 15,000 people in West Virginia would have been in poverty.