The 2018 Legislative Session came to a close last week, and in a break from the past two years, the budget was passed early with little controversy. While every year, the budget undergoes some changes from the governor’s proposal to the final product, this year most of the changes to the budget were part of the deal to pass the 5 percent state employee pay raise.

The FY 2019 budget proposed by Governor Justice showed the state in a much better financial position than what was projected last year. This time last year, the budget office was projecting a $38 million budget gap for 2019, with future budget gaps growing to $162 million. This year, the governor’s proposed budget for 2019 showed a $2 million surplus, with projections showing future surpluses growing to $126 million.

The reversal of the state’s budget situation was due to both reduced expenditures and increased revenues. Rising natural gas prices increased estimates for severance tax revenue. Last year, West Virginia was estimated to collect $278 million in severance tax revenue for FY 2019, now the state is estimated to collect $362. Overall, estimated general revenue collections for FY 2019 in the governor’s proposed budget were $191 million above last year’s projections for FY 2019.

Most of the reduction in expenditures in the governor’s proposal was due to Medicaid. The state ended FY 2017 with significant surplus in Medicaid, with Medicaid spending far below what was projected. The FY 2019 budget uses $103 million of that surplus to reduce the general revenue appropriation. Other changes to the FY 2019 budget in the governor’s proposal compared to last year’s projections include slower growth in projected PEIA premiums, and a one percent pay increase instead of two percent for all state employees as projected last year.

The governor also proposed several increases in the FY 2019 Budget. These included a $20 million increase in General Services for maintenance and repairs on state owned buildings, $14 million for Tourism advertising and marketing, $35 million to the Development Office and $3 million to Natural Resources for maintenance in state parks. And after years of cuts, the governor proposed a $16 million increase for Higher Education, including $7 million for a community college tuition subsidy.

Not much was made of the budget during the legislative session until the teacher strike and the subsequent standoff between the governor, House, and Senate. The strike ended with the proposed one percent pay raise increased to five percent for all state employees and a freeze on PEIA changes. Together, these changes would cost roughly an extra $100 million.

While the governor revised his revenue estimates to provide additional revenue, the legislature decided to pay for the pay increases and PEIA freeze through budget cuts. Most of these cuts came from eliminating the governor’s enhancements to General Services, the Development Office and Tourism. 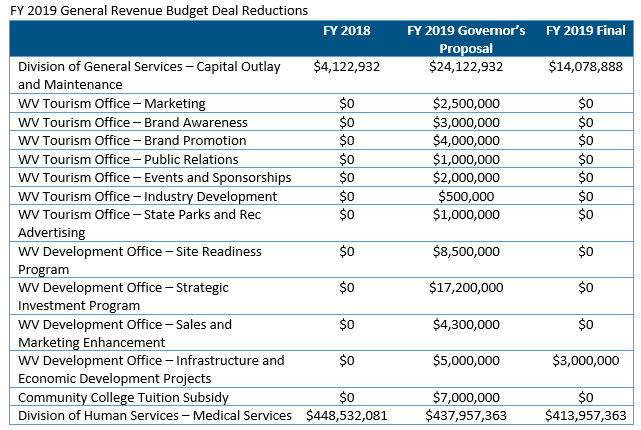 Overall, accounting for the five percent pay increase for state employees, the $21 million for the PEIA stabilization fund, and budget deal cuts, and other changes, the final FY 2019 general revenue budget totals $4.38 billion, a $156.8 million increase from FY 2018. 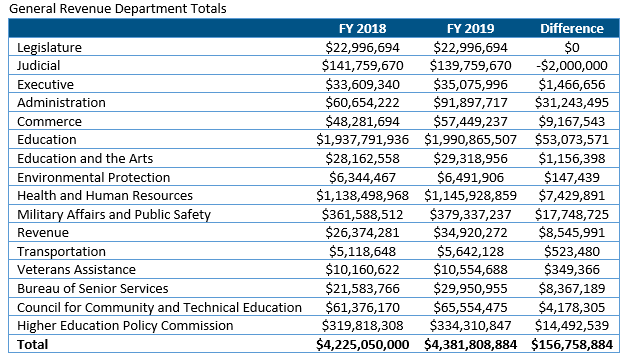