Federal spending slows, so why the deficits?

In the debate over the federal government’s recent budget deficits, many are arguing that government spending over the last couple of years has been out of control. However, the numbers show that is just not true.

This chart looks compares the average annual growth rate of government spending by decade since the 1950s. And as you can see, in the past decade, while deficits were growing, federal spending was growing at a rate slower than the historical average (the data for this and all charts in this post come from the Bureau of Economic Analysis). 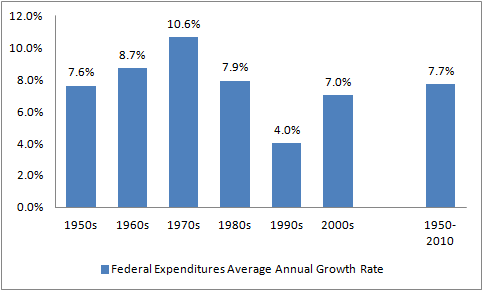 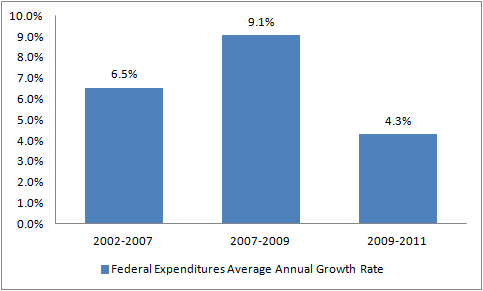 But while federal expenditures have grown at historically slow rates since 2009, the budget deficit has grown to record amounts. Why? Take a look at the growth rates of federal receipts. 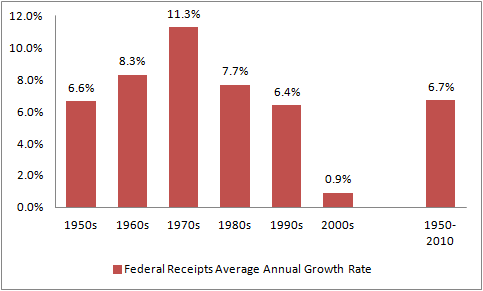 Total federal receipts have grown at an average annual rate of 6.7% since 1950. However, in the 2000s, that rate dropped all the way down to 0.9%. And while tax cuts have played a role in slowing down federal receipts, so did the recession. 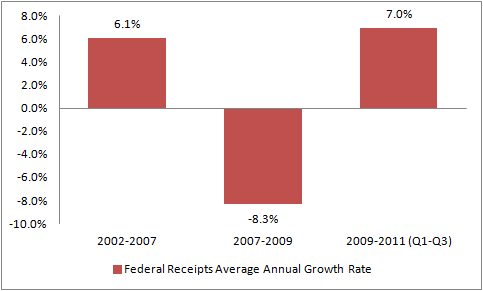 In the years running up before the recession, federal receipts grew at an average annual rate of 6.1%, which was slower than the historical average, likely due to the large Bush-era tax cuts. However during the recession, receipts shrank at an annual rate of 8.3%, which led to the explosion in the size of the deficit. Since then, as the economy improves, so have federal receipts, but not enough to make up the huge losses from the recession.
Just how bad was this recession on the federal budget, particularly revenue? Lets compare it to the major recession in the early 1980s. That recession lasted 16 months, while the recession that started in late 2007 lasted 18. These next charts compare average quarterly growth rates of federal expenditures and receipts during the recessions, and in the two years after the recessions ended. For reference, the average quarterly growth rate since 1950 is 1.8% for federal expenditures and 1.7% for federal receipts. 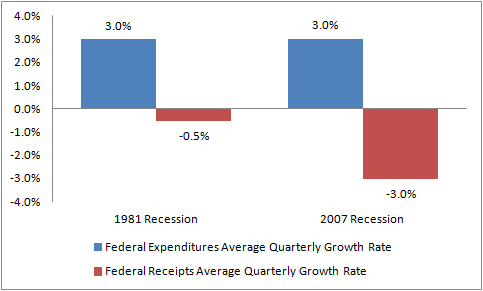 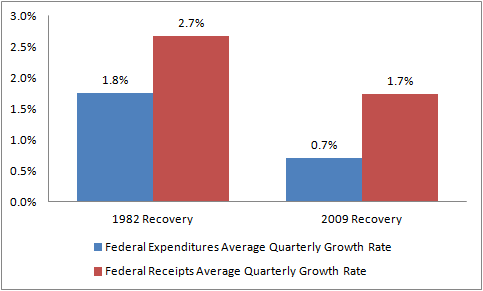 During the recovery after the 1981 recession, federal spending fell back down to average growth rates, while the growth of receipts increased dramatically. The growth rate of federal spending fell dramatically after the 2007 recession, to an average quarterly rate of 0.7%, less than half of the historical average. In fact, the sharp slowdown in government expenditures is likely a reason why the economy remained so sluggish after the recession. And while the growth rate of receipts is back to the historical average, it is below the rate of the 1982 recovery, due to both the slow pace of the recovery and more tax cuts.
Below is another chart showing growth in government spending today is slow by recent standards. This chart shows the percent change in federal expenditures by president over the first three years of their terms. And once again, the rhetoric about out of control federal spending under the Obama administration is not backed by reality. 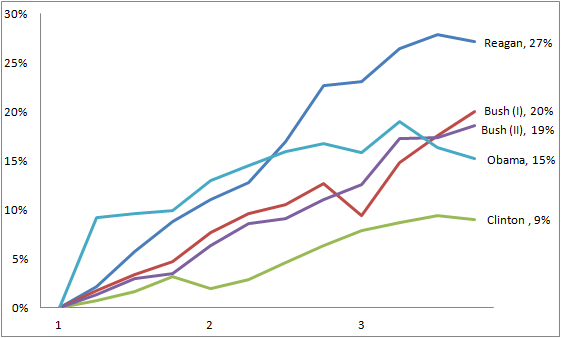 Federal expenditures in the first three years of the Obama administration have increased 15%, compared to 19% under Bush (II), and 27% under Reagan. After an initial spike in response to the recession, spending growth flattened and has started to fall.
So what does all of this mean? Government spending grew rapidly during the recession, but the rate wasn’t unprecedented. Since the end of the recession, government spending has grown more slowly over the past 3 years than at almost any point in the past 60 years. The leading driver of our large deficits in recent years has been a lack of revenue, caused by a mixture of tax cuts and the recession.