Several years ago, West Virginia enacted a series of large business tax cuts with the belief that they would help grow the state’s economy. Today policymakers are promoting that same theory, even though the previous tax cuts have largely failed to put West Virginia on a path to prosperity, with the state losing thousands of jobs. Cutting business taxes further, while continuing to neglect the public investments that create the real foundation for economic growth, will likely result in more of the same. Read Fast Facts PDF.

Fact #1: Academic research shows cutting state and local business taxes is not a foolproof way to grow the economy and create jobs.

Policymakers often promote tax cuts as a surefire way to boost the economy and create jobs, but the evidence is not so clear-cut according to the experts. Of the 37 peer-reviewed studies published on state tax issues since 2000, 19 found no significant link between state and local taxes and economic growth. Other studies were inconsistent, showing small negative or positive effect depending on the specific variable, such as the type of tax or the time period. Only six of the 37 studies found that taxes have a positive and significant effect on economic growth. 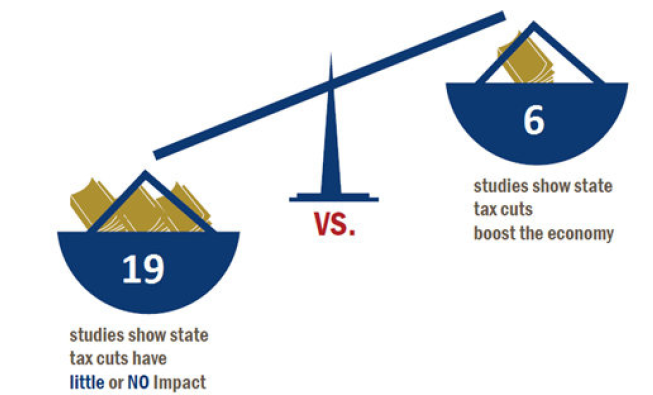 These recent studies throw cold water on the notion that there is a consensus among economists or that “economic theory predicts” that lower state taxes boost economic growth. The empirical evidence does not support these claims.

Fact #2: State and local business taxes are a small share of the cost of doing business.

Rational profit-maximizing businesses would also consider the level of public provisions (e.g. good schools, roads, etc.), the quality of life, the supply of a qualified workers, and other state and local policies. Businesses might also look to national tax policies and national economic conditions when looking to expand and make a profit. All of these other considerations cast doubt on the theoretical argument that state taxation alone will have a large impact on economic growth.

Anti-tax groups such as the Tax Foundation and ALEC rank states annually according to how “business friendly” their tax policies are, and lawmakers, including in West Virginia, use the rankings to justify their calls for tax cuts. However, these indexes’ rankings have little to do with economic growth, and instead are designed to promote a political agenda of low taxes, low wages, spending cuts, and less regulation.

None of the prominent business climate indexes, including the Tax Foundation’s State Business Climate Index or ALEC’s Rich States Poor States, have any predictive value about economic growth. In fact, a recent analysis found not only does ALEC’s index not predict growth over one-, three-, and six-year time frames, but when controlling for other variables, there is a negative relationship between the ALEC rankings and growth.{2] But because these indexes encourage a single-minded pursuit of tax cuts as an economic develop strategy, they undermine the more important foundations of state economic growth and prosperity: a well-educated workforce, efficient infrastructure, and quality public services.

For example, West Virginia has significantly cut business taxes over the past eight years, with business taxes as a share of the economy falling from 7.6 percent to 5.8 percent. As a result, the state’s rank in the Tax Foundation’s State Business Climate Index rose from 37th to 21st. But while West Virginia’s rank improved, its economy didn’t, with employment falling by 39,000. Not only were the tax cuts ineffective at growing jobs, but the state’s investment in its workforce was hurt, as years of budget cuts brought on by the tax cuts have resulted in higher tuition for college students across the state. 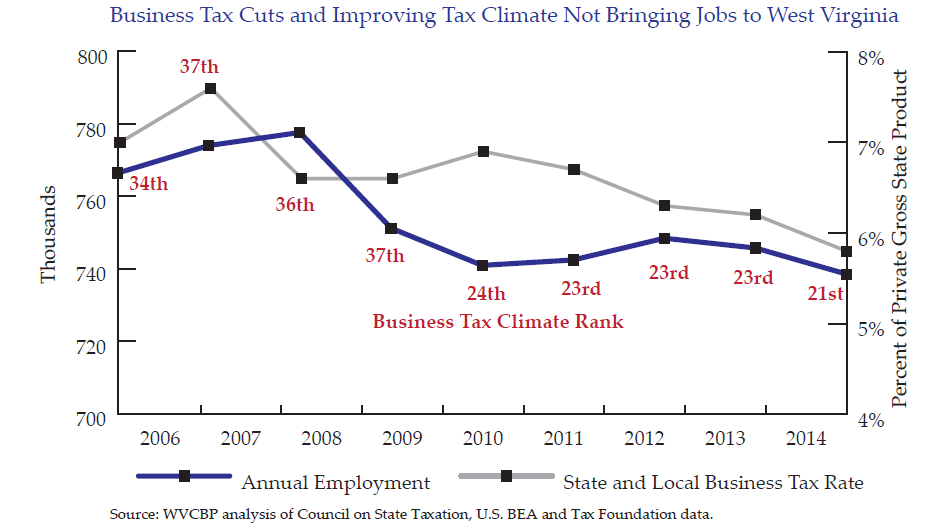 West Virginia is not alone when it comes to states which have been disappointed in the economic results of their tax cuts. Since 2012, five states have sharply cut their personal income taxes in the hope of boosting economic growth. Of the five, only North Carolina has outperformed the nation in job and personal income growth. But despite its recent economic performance, North Carolina has made substantial budget cuts and is drastically underfunding schools, colleges and other important public services businesses needed to thrive.

Kansas, after enacting the largest personal income tax cuts in recent history, performed especially poorly. Since enacting its tax cuts, it has lagged behind the nation in both job and personal income growth. The tax cuts were promised to be a “shot of adrenaline,” into Kansas’s economy, providing a “natural experiment” for tax cuts to create economic growth. Instead, the tax cuts opened up a $400 million hole in the state’s budget. 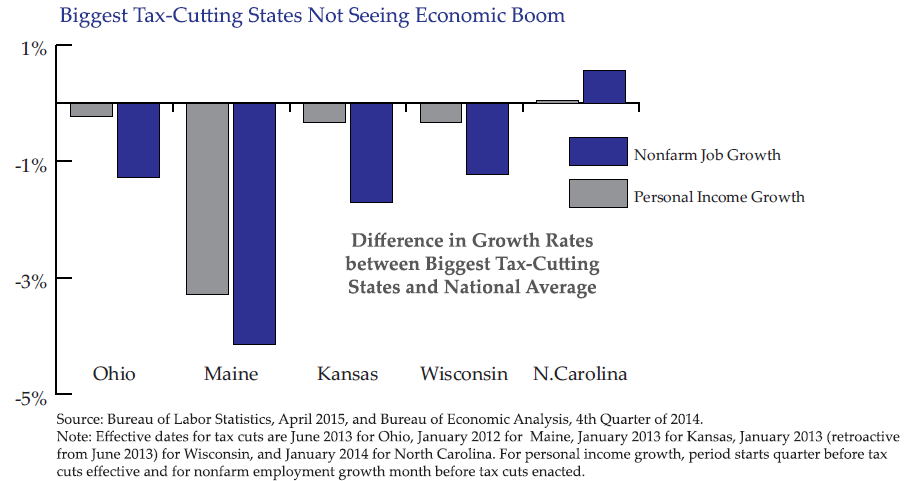 Fact #5: A skilled and knowledgeable workforce is what really matters to businesses.

A recent report from the Center for Business and Economic Research at the University of Kentucky asked the question, why does Kentucky, a state similar to West Virginia, lag behind the rest of the south when it comes to economic growth? Of all the factors examined in the report – taxes, infrastructure, the size of government, business climate, etc. – the biggest factor in Kentucky’s poor economic performance was its stock of knowledge, particularly its low levels of education among its workers.

For businesses looking to locate or expand into a state, the quality of the workforce is one of the most important factors. A survey of corporate executives by Area Development Magazine found that availability of skilled labor was second only to highway accessibility in the most important site selection factors for businesses. Cutting taxes won’t build a high-quality workforce, instead it makes it harder for a state to invest in educating its workers, giving them the knowledge and skills they need to attract businesses and grow the economy.

West Virginia has a choice when it comes to economic development. Tax cuts represent the low road, a race to the bottom to make West Virginia a cheap place to do business, at the expense of public investments like education and infrastructure, like the state has seen in recent years. Or West Virginia can focus on being a good place to do business by making strong public investments that provide a foundation for stronger growth and prosperity. Our economy relies on strong schools and universities to educate our workers, well-maintained roads for businesses to access markets, and quality public safety and health services to keep families safe and improve our quality of life. As we’ve learned from the past, business tax cuts almost always result in spending cuts, undermining the investments that truly grow the economy.