This fall our members of Congress will have the chance to show that they support hard-working low-income families. PDF of report.

Important provisions of two anti-poverty, pro-work policies, the Earned Income Tax Credit (EITC) and the Child Tax Credit (CTC), are set to expire unless Congress acts to save them. By doing so, Congress will give low-income families a hand-up, not a hand out, to pay for basic necessities like child care and transportation that help them work while taking care of their families.

Fact #1: The Earned Income Tax Credit (EITC) and the Child Tax Credit (CTC) are among the nation’s most powerful anti-poverty tools and have bipartisan support.

Next to Social Security, the EITC and the CTC make up the nation’s most powerful anti-poverty program. In 2012, they lifted 10.1 million people out of poverty, including 5.3 million children.

The EITC, a federal tax credit for low- and moderate-income working families and individuals, is designed to encourage and reward work, offset federal payroll and income taxes, and raise living standards. To claim the credit, a taxpayer must have earnings from a job.

In 2012, 160,000 West Virginia households received the EITC and 95,000 received the low-income part of the CTC. Not only did the credits help these families make ends meet, the EITC also put about $341 million into West Virginia’s economy that year.

Important, but temporary, provisions of these tax credits for working families were added years ago and were never made permanent. These provisions – which reduce the marriage penalty in the EITC, provide a larger EITC for larger famlies to reflect their higher living costs, and make the CTC available to working families with the lowest incomes – are helping an additional 81,000 West Virginia families, including 131,000 West Virginia children, make ends meet.

The EITC enjoys bipartisan support. It was signed into law by President Gerald Ford and strengthened by President Reagan, who cited the tax credit as supporting work and personal responsibility. When working families can keep more of their money to pay for basic necessities, it is easier for them to stay on the job and support themselves. The EITC rewards work while making it more possible for workers to keep a job.

Fact #2: If Congress fails to act, thousands of West Virginians will fall into poverty.

Expiring business tax cuts are about to get a lot of attention this fall as Congress decides whether to renew them or make some of them permanent. It’s important that Congress also remember low-income working families as it discusses who should get permanent tax credits. If Congress fails to include working families in the equation, 40,000 West Virgininas in low- and modest-income working families, including 18,000 children, would fall into – or deeper into – poverty when the credits provisions expire.

Fact #3: The federal EITC helps West Virginians from all walks of life.

The federal EITC helps thousands of West Virginians, from all walks of life, stay on the job, providing them with extra resources to pay for basic necessities.

Fact #4: Pro-work tax credits help children and families in both the short and long term.

Research shows that children whose families receive an income boost from these credits on average do better in school and are more likely to go to college and to work more and earn more as adults. They are also likelier to be healthier and avoid the early onset of various adult illnesses associated with child poverty.

The EITC and CTC encourage and reward work, and there is growing evidence that income from these credits leads to improved school performance, higher college enrollment, and increased work effort and earnings in adulthood. In fact, these important tax credits help West Virginians through every stage of life. 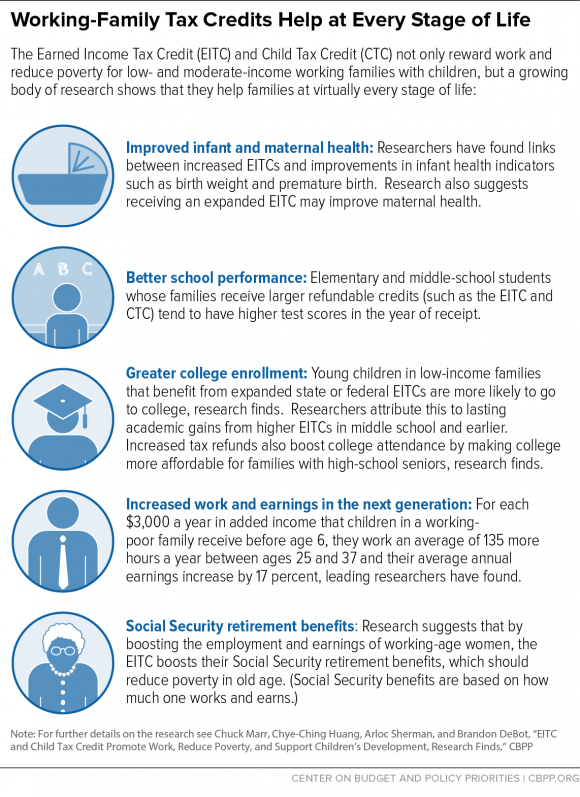