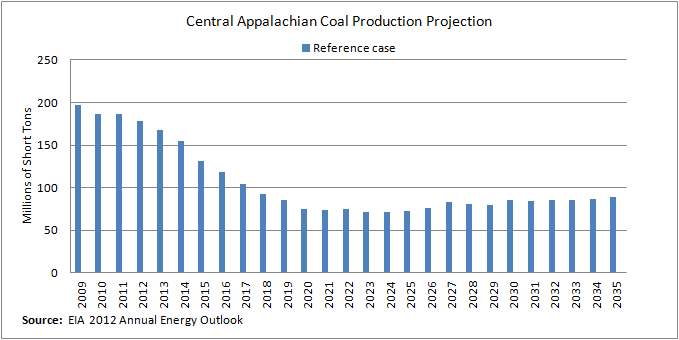 According to the EIA, “Appalachian coal production declines substantially from current levels, as coal produced from the extensively mined, higher cost reserves of Central Appalachia is supplanted by lower cost coal from other supply regions,” saying that Appalachian coal is being priced out of the market by cheaper, easier to mine coal from other parts of the country.
But the rhetoric around coal in the state from politicians, the coal industry, and prominent media personalities suggests that EPA regulations are to blame for the coming decline of coal in West Virginia, as part of the so-called War on Coal.
But what if the coal industry got its way? What if we could guarantee that the EPA would never limit greenhouse gas emissions, allowing utilities to burn as much coal as they want? Would coal production in Central Appalachia reverse its decline? The answer is no.
The EIA has modeled this exact scenario, with its “No greenhouse gas concern” case scenario, which projects coal production assuming no greenhouse gas limiting policies are enacted and the market never anticipates any. And according to the projections, even with a guarantee of no carbon tax, no emission limits, no cap and trade system, coal production in Central Appalachia will continue to decline, just as much as in the current baseline projection. 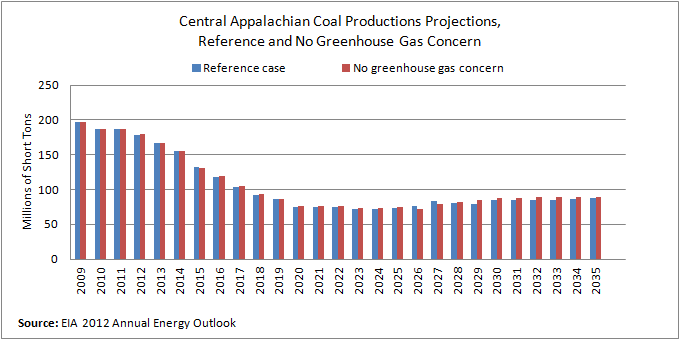 Under both the reference case, and the no greenhouse gas policy scenario, coal production in Central Appalachia is projected to decline by around 62% between 2009 and 2020.
The same is true of the mercury emission standards enacted in December. While starting a firestorm on controversy in the state, projections from the EIA show a decline in Central Appalachian Coal production with or without the mercury standards. The projections in the 2012 early release AEO were made before the emissions standards were finalized, and were not incorporated into the projections. The final 2012 AEO did include the new rules in the projections, but once again, the effect of the regulations on Central Appalachian coal production was negligible. (Check here for a full list of changes from the 2012 early release to the 2012 official release). 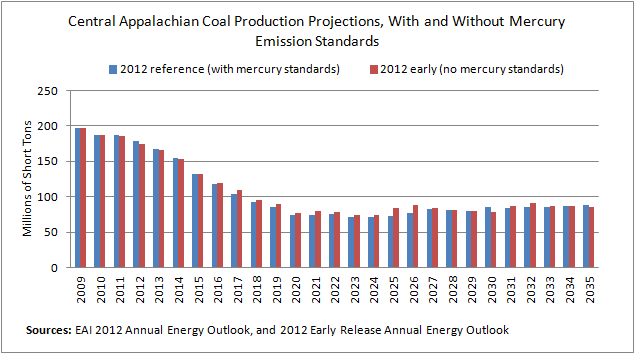 The reality is that even without greenhouse gas or mercury regulations, coal production in Central Appalachia is going to dramatically decline. Repealing environmental regulations won’t make the remaining coal seams in West Virginia any thicker or easier to mine, and it won’t stop power plants from converting to natural gas. To ignore this reality, and to act as if stopping the EPA will save the coal industry in West Virginia, is shortsighted and dangerous to the state’s future.