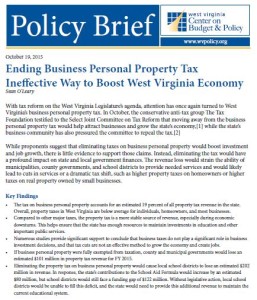 With tax reform on the West Virginia Legislature’s agenda, attention has once again turned to West Virginia’s business personal property tax. In October, the conservative anti-tax group The Tax Foundation testified to the Select Joint Committee on Tax Reform that moving away from the business personal property tax would help attract businesses and grow the state’s economy, while the state’s business community has also pressured the committee to repeal the tax. Read PDF of full report.

While proponents suggest that eliminating taxes on business personal property would boost investment and job growth, there is little evidence to support those claims. Instead, eliminating the tax would have a profound impact on state and local government finances. The revenue loss would strain the ability of municipalities, county governments, and school districts to provide needed services and would likely lead to cuts in services or a dramatic tax shift, such as higher property taxes on homeowners or higher taxes on real property owned by small businesses.