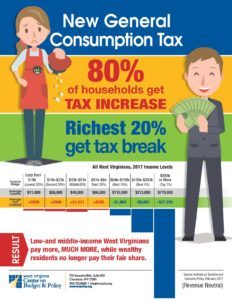 West Virginia grows its economy and creates good jobs by investing in the things that help communities and individuals thrive, like our schools, health care, and public safety. Our state needs tax reform that generates the resources we need to pay for these things and asks everyone to pay what they owe. Eliminating the state income tax does just the opposite.

Similar to Kansas’s failed tax experiment, Senate Bill 335 puts West Virginia on a path to eliminate the state’s personal and corporate income taxes, reduce severance taxes, and replace with them with a broad-base sales tax that would be the highest in the nation. In Kansas, this has resulted in an ongoing fiscal crisis that has forced cuts to schools and other services people rely on every day, without the promised economic benefit. Kansas legislators are now trying to reverse course.

SB 335 would dramatically increase taxes on low-income populations and the middle-class to pay for large tax breaks for the richest West Virginians. If enacted, it would be the largest redistribution of wealth in the state in the last century.

Cutting the state income tax and replacing only some of the lost revenue with higher sales taxes will have immediate and harmful effects on our state. Instead of growing our economy, it is almost certain to lead to deep cuts in investments in schools, roads, and other critical building blocks of strong economy – similar to what happened in Kansas. 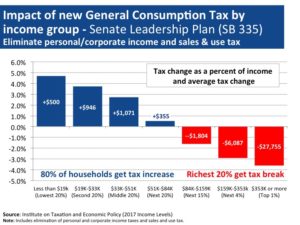 SB 335 will also reduce what people spend in local stores, slowing the state’s economic growth and job creation. A higher sales tax makes the price of everything that is subject to a tax go up, and that is likely to reduce spending at local businesses. When they can, people will instead cross the border or buy from out-of-state Internet merchants who don’t charge sales tax or charge a lower rate, causing West Virginia small businesses to layoff workers.

Businesses will also face higher sales taxes that will eliminate a portion of any savings from the income tax cuts. A substantial share of business purchases – such as electricity, heat, water, machinery, equipment, computers, furniture, and shipping supplies – will now be taxed at eight percent, hurting West Virginia small businesses by adding thousands of dollars in annual expenses.

Our tourism industry will suffer as the state lodging tax increases to 11 percent. Combined with the six percent local hotel occupancy tax, West Virginia would have the highest lodging tax in the nation.

Because the increased sales tax revenue is unlikely to fully replace the lost income tax revenue, the state will very likely have to cut back on funding for schools and other services provided at the local level, and local governments, in turn, likely will increase business taxes to make up some of the difference.

The idea that economists agree that taxing consumption is better for economic growth than taxing income is just not true. There is no consensus among economists that shifting from reliance on state income taxes to sales taxes would improve state economic growth.

Most economists who favor a pure consumption tax also acknowledge that it will increase taxes for low- and moderate-income households and support taking steps to alleviate this problem. Yet the proposal in our state fails to do this.