Drilling Down into Natural Gas Employment

West Virginia’s natural gas industry has received significant attention in the past few years, particularly with the development of the Marcellus Shale. The increase in attention and activity has led to an increase in jobs in the industry, but what exactly are the jobs and are they all reacting to the Marcellus boom equally?

In their report on the economic impact of the natural gas industry, WVU’s Bureau of Business and Economic Research identified 7 oil and natural gas NAICS industry sectors, which included: 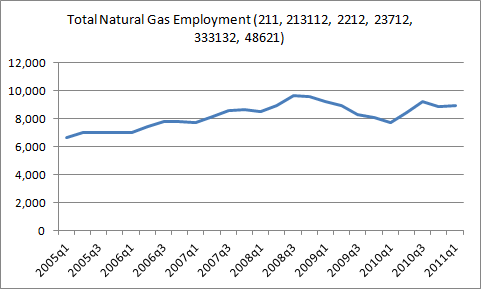 211 Oil and Gas Extraction
Industries in the Oil and Gas Extraction subsector operate and/or develop oil and gas field properties. Such activities may include exploration for crude petroleum and natural gas; drilling, completing, and equipping wells; operating separators, emulsion breakers, desilting equipment, and field gathering lines for crude petroleum and natural gas; and all other activities in the preparation of oil and gas up to the point of shipment from the producing property. This subsector includes the production of crude petroleum, the mining and extraction of oil from oil shale and oil sands, and the production of natural gas, sulfur recovery from natural gas, and recovery of hydrocarbon liquids. 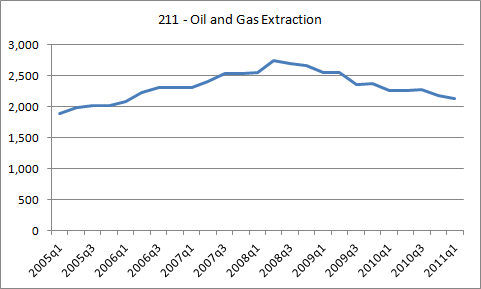 Oil and gas extraction is the main natural gas industry sector, and employing 2,130 in 2011q1. However, this particular industry sector has been steadily declining since its peak in 2008, and is nearly back down to its employment level of six years ago. And, as the next section shows, oil and gas extraction has been surpassed by support activities as the largest natural gas sector employer. 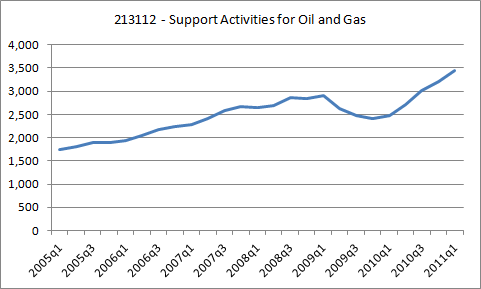 While the oil and gas extraction sector has been in a steady decline the past three year, the support activities sector has bounced back from its recession induced decline. This sector employed 3,440 in 2011q1, an increase of 97.2% from 2005. The support activities sector is also the largest natural gas sector, surpassing the oil and gas extraction sector in number employed in 2007. 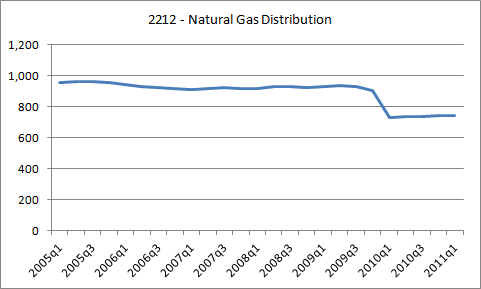 The natural gas distribution sector has been relatively flat compared to the overall natural gas industry, staying slightly below 1,000 from 2005 to 2010. The sector experienced a sharp drop in 2010q1, from 904 to 732, and has remained between 730 and 750 since then.

23712 Oil and Gas Pipeline Construction
This industry comprises establishments primarily engaged in the construction of oil and gas lines, mains, refineries, and storage tanks. The work performed may include new work, reconstruction, rehabilitation, and repairs. Specialty trade contractors are included in this group if they are engaged in activities primarily related to oil and gas pipeline and related structures construction. All structures (including buildings) that are integral parts of oil and gas networks (e.g., storage tanks, pumping stations, and refineries) are included in this industry. 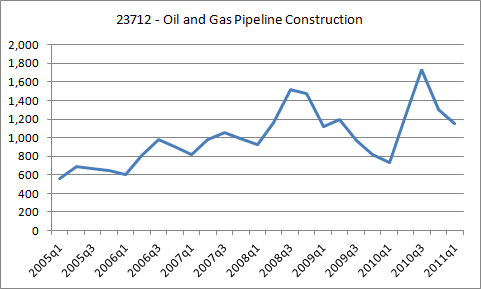 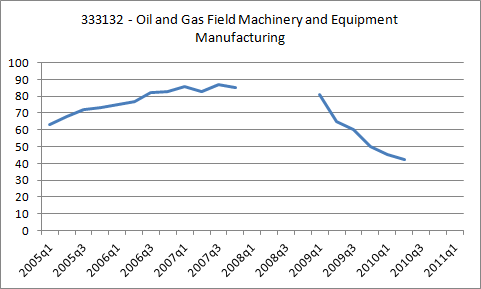 The oil and gas machinery and equipment manufacturing is the smallest of the natural gas employment sectors, with only 42 employees in 2010q2, the most recent quarter with data available. the numbers on this sector are spotty, with some large gaps, but there seems to be a decline since 2008, when employment peaked at 87 in 2007q3. 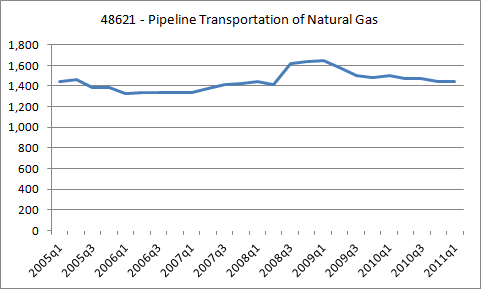