Does the U.S. Have a Long-Term Deficit Problem?

With the election over and the “fiscal cliff” drawing near, the nation’s attention has once again turned to the federal government’s budget deficit and the problems we face addressing it. Most agree that some combination of spending cuts and tax increases will be necessary in order to put the federal budget on a sustainable path, and a large part of the debate over the deficit is over how much spending should be cut versus how much tax revenue should be raised.

Over the past few years, the source of the most recent federal deficits has been clear. As the charts show, the biggest contributors to today’s deficits have been the recession, tax cuts and wars. Get the economy growing, repeal the tax cuts, and end the wars, and you’ve solved a big chunk of today’s deficit problem. 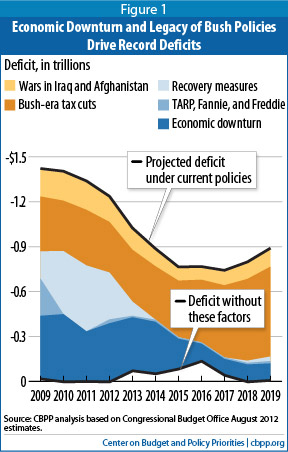 In fact, before the recession struck, we really didn’t have much of a deficit problem at all. The deficit was just over 1 percent of GDP before the financial crisis took hold, and were projected to stay low for the near future. It was only when the housing bubble popped and the financial markets collapsed, sinking the economy, that the deficit took off. 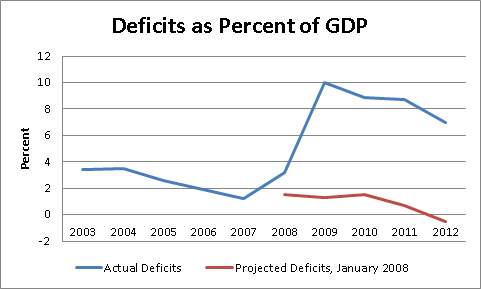 But today’s deficits aren’t the only problem. As we’ve heard countless times, future deficits will put the nation on an unsustainable path, and if we don’t stop spending, we will go broke.

But it’s not , “more government hiring, more student loans, mortgage relief, jobs programs (we now have 47), free health care, green energy subsidies, stimulus spending,” that is causing our future problems, as Hoppy Kerchaval would like to believe in his commentary. These three charts show all of the government’s spending, projected out to 2035, from the Congressional Budget Office. And as they show, the real source of our deficit problem is plain as day. 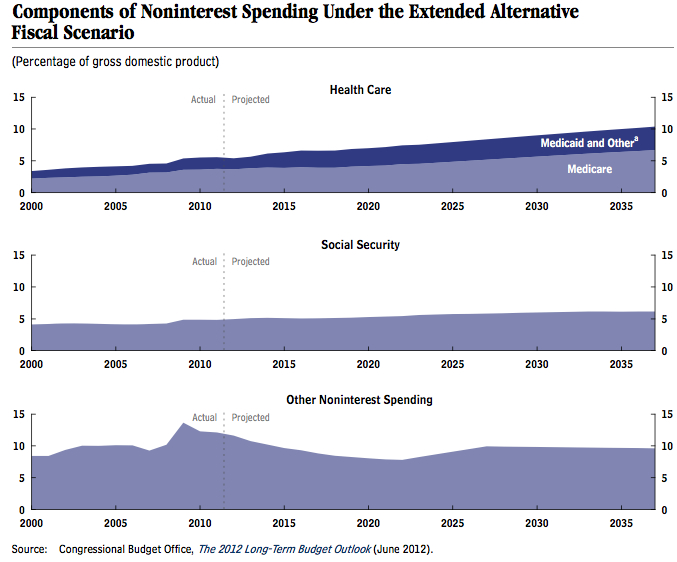 The top chart is health care, including Medicare and Medicaid, as well as the Affordable Care Act. The middle chart is Social Security, and the bottom chart is everything else: defense, education, and everything that Hoppy lists as are deficit problems in his commentary.

What do these charts tell us? Pundits like Hoppy have it wrong. We don’t have a deficit problem, or a spending problem, we have a health care problem. Spending on social security grows, but not by much. And while the trust fund may not be solvent now, the solution is pretty easy. And spending on EVERYTHING ELSE is actually falling. Healthcare costs are the cause of our deficits; healthcare costs are the real problem.

But simply cutting public spending on healthcare isn’t the solution. Private healthcare spending is growing even faster. The healthcare problem in our federal budget is also a problem in every household and every business in the country.

Without addressing the rising costs of healthcare in this country, all of our deficit reduction efforts will be wasted. But this challenge isn’t impossible. All we have to do is get our per person health care costs down to the same level as any number of countries, all of which have longer life expectancies than in the U.S., and we can watch our budget deficits disappear.