I’ve talked before about the relationship (or lack thereof) between the level of business taxation and economic growth in the states, concluding that things like quality public services, access to markets and inputs, and a quality workforce all matter more to economic growth and prosperity than taxes.

The results showed no direct connection between the size of government in a state and that state’s economic growth. The two had a correlation coefficient of 0.06, again suggesting no connection.
But what about another question – government growth. Does government grow at the expense of the rest of the economy? To examine that question, I used the same data, only this time, instead of using the average share of GDP that state and local government had in each state, I used the average annual growth rate of state and local government, comparing it to the average annual growth rate for private GDP. And this is what that look like. 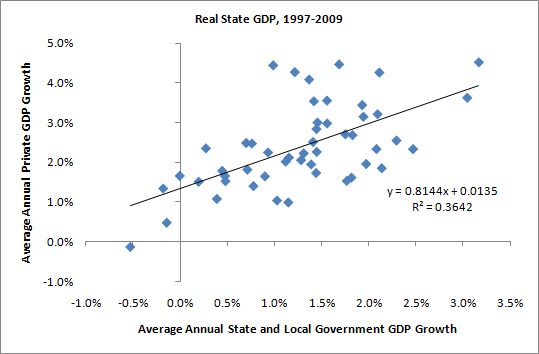