Previous blog posts have covered West Virginia’s proposal to modify its Medicaid program through a request to the federal government to waive certain requirements of the law, known as a 1115 waiver. As the posts explained, the proposed 1115 waiver would result in decreased access to health care with fewer West Virginians covered, ultimately harming the overall health of the state’s population.

One of the biggest changes to West Virginia’s Medicaid program under the 1115 waiver is the implementation of a work requirement. The push to add a work requirement to Medicaid is largely based on the myth that people covered by Medicaid are not working, or would be encouraged to increase their work by the requirement, with the goal of having their incomes rise above the level that makes them eligible for Medicaid. However, this assumption ignores both the realities of West Virginia’s Medicaid population, low-wage work, and barriers to employment.

Recent research from the University of Michigan Institute for Healthcare Policy and Innovation on Michigan’s Medicaid expansion undercuts the main arguments for adding work requirements to Medicaid. Researchers found that more than 60 percent of Medicaid expansion beneficiaries in Michigan are either working already or unable to work because of serious physical or mental health impairments. Another 12 percent were either students, retired, or homemakers.

Those Medicaid expansion recipients in Michigan who were out of work, the target population of the work requirements, were very likely to be in poor health. Two-thirds reported having a chronic illness, 35 percent had been diagnosed with a mental illness, and one-fourth said they had a physical or mental impairment that interfered with their ability to function at least half the days in the past month. 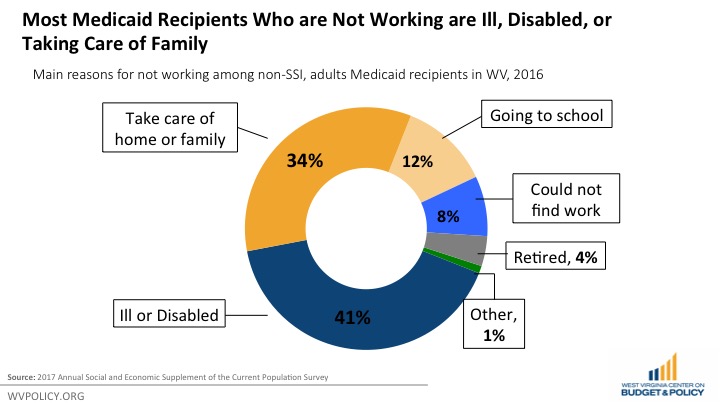 Work requirements also ignore the nature of low-income work. For example, the work requirement sought by Kentucky in its 1115 waiver would require Medicaid recipients to work at least 20 hours per week. In fact, according to 2016 Census data, 10 percent of non-elderly West Virginia adults whose incomes qualify them for Medicaid work less than 20 hours per week. As of 2016, the industries that employed the most Medicaid expansion-eligible adults in West Virginia were restaurants and other food services, construction, and department and discount stores, all of which often provide only part time and sometimes irregular work opportunities.

Work requirements can make it harder for people to work. When people lose their Medicaid benefits, they are less likely to be able to work. People must be healthy in order to work, and consistent access to health insurance is vital to being healthy enough to work. Medicaid expansion enrollees from Ohio and Michigan reported that having Medicaid made it easier to look for employment and stay employed. Making Medicaid more difficult to access could have the exact opposite effect on employment that supporters of work requirements claim to be pursuing.

In addition to failing to promote employment, most individuals subject to work requirements remain in poverty, and in some cases become poorer. An evaluation of federal assistance programs found that while recipients were more likely to be employed in the first two years after becoming subject to work requirements, their earnings were not sufficient to lift them out of poverty. Despite increased earnings, the poverty rate didn’t decline, because recipients’ earnings gains generally weren’t large enough to lift them over the poverty line and were offset in part by reductions in cash assistance payments and SNAP benefits. Some beneficiaries even fell deeper into poverty, as a number of recipients subject to work requirements lost their benefits even though they had not obtained a job.

West Virginia’s own experiment with work requirements has been unsuccessful. In 2016, West Virginia enacted a nine county pilot project to enact work and job training requirements for able-bodied, adult SNAP recipients. According to WV DHHR, the pilot project had no significant impact on employment among SNAP recipients, while the number of SNAP caseloads declined by 5,417, meaning recipients were losing benefits because they had not found work.

The job training aspect of West Virginia’s SNAP work requirement pilot project was also largely ineffective. Of the 13,984 referrals made to the SNAP Employment and Training program, only 259 gained employment, less than two percent of referrals. 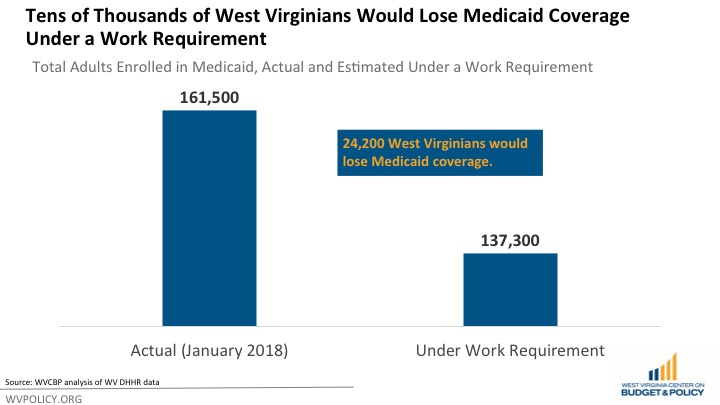 A weak labor market in West Virginia would lead to thousands losing health care coverage through no fault of their own with a work requirement. According to the BLS, total employment has declined by more than 13,000 jobs since 2014, and 24 of the state’s 55 counties have lost jobs over the past 12 months. A weak labor market in much of the state, barriers to gainful employment or advancement like criminal records and poor health, and a lack of income supports and adequate wages are primarily what is holding back unemployed and underemployed Medicaid enrollees from better economic mobility. Adding a work requirement to gain access to health care coverage would only exacerbate these problems.