Our recent Jobs Count report showed that the economy has added zero net jobs since June and the unemployment rate remains above 8 percent. As a previous post had noted, the momentum the economy seemed to have been building during the recover has been lost over the past few months. However, one sector of the economy has been performing much worse than the rest, and its poor performance has been a drag on the recovery. 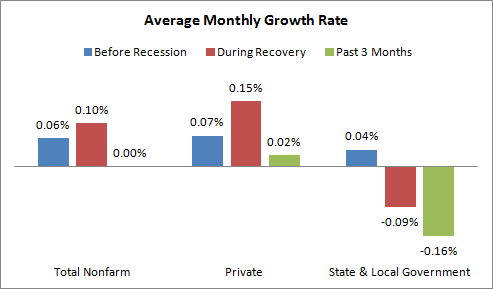 Source: Bureau of Labor Statistics
While private sector employment has grown at twice the monthly rate it did in the 18 months before the recession, state and local government employment been on the decline. And that decline has accelerated recently, while the private sector has limped along, unable to make up the difference. As a result, the recovery has stalled.
Maybe a proposal to prevent further decline in public employment isn’t so absurd.