Cost of the Recession: 35,000 Rural Jobs in West Virginia

Here is an article done by the folks at the Center for Rural Strategies, which I may have stolen the title from, about the impact of the Great Recession on rural counties. West Virginia was one of four states, the others being Michigan, Alabama, and Georgia, that lost over 10 percent of their rural jobs. Since July 2007, rural counties in West Virginia have lost 35,267 jobs. The unemployment rate in rural West Virginia counties has more than doubled, from 4.46% to 8.99%.

The article discusses that while overall, rural counties experienced job losses, the results were not uniform. In fact five states saw increases in the number of rural jobs. While no rural county in West Virginia saw job increases, the losses varied greatly from county to county. 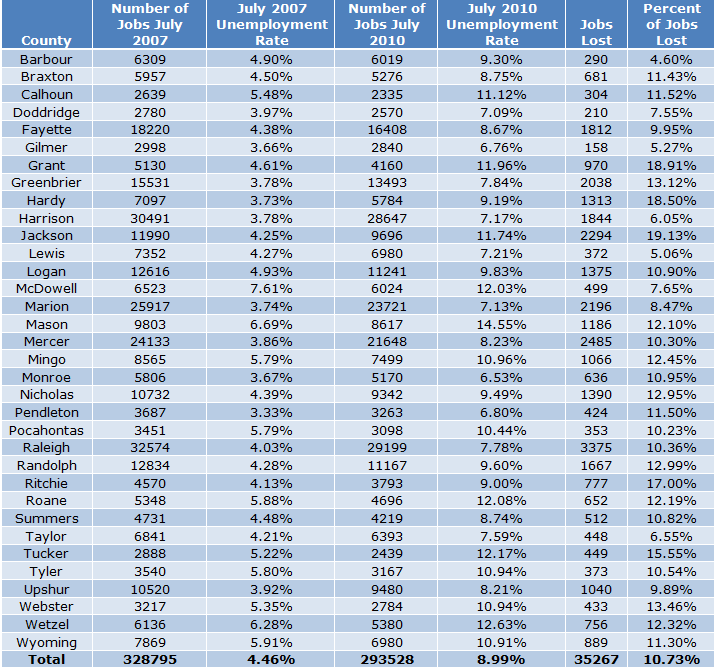 Source: Dailyyonder.com and U.S. Bureau of Labor Statistics
Jackson, Grant, and Hardy counties were hit particularly hard, losing over 18% of their jobs, with their unemployment rates almost tripling.
West Virginia’s unemployment rate was 8.6% in July 2010, slightly lower than the 8.99% for rural counties. Over half of West Virginia’s rural counties have a higher unemployment rate than the state rate, with rates ranging from 6.53% in Monroe county to 14.55% in Mason County.
Overall, 1.2 million rural jobs have been lost since he recession began in 2007.