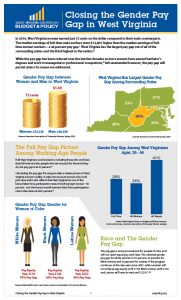 In 2016, West Virginia women earned just 72 cents on the dollar compared to their male counterparts. The median earnings of full-time male workers were $12,801 higher than the median earnings of full-time women workers – a 28 percent pay gap. West Virginia has the largest pay gap out of all the surrounding states and the third highest in the nation.

This is according to a West Virginia Center on Budget and Policy fact sheet that takes a look at the full pay gap picture among working-age people throughout the state, why it exist, its short- and long-term impact and how policymakers can close the gap.