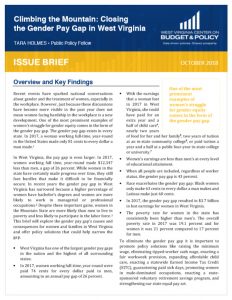 West Virginia has one of the largest gender pay gaps in the nation and the highest of all surrounding states, according to Climbing the Mountain: Closing the Gender Pay Gap in West Virginia, a new West Virginia Center on Budget and Policy report. PDF of report.

The report shows shows in 2017, women working full-time, year round in West Virginia were paid 74 cents for every dollar paid to men, a 26 percent pay gap. West Virginia has the third highest pay gap in the nation following Utah and Louisiana. A woman working full-time, year-round in the United States in 2017 made only 81 cents to every dollar a man made.

The gender pay gap exist in every state and at every level of educational attainment. The gap itself varies throughout the country as well as within the Mountain State, from no pay gap in Doddridge County to a gap of 50 percent in Braxton County.

When all people are included, regardless of worker status, the gap is even wider in West Virginia at 43 percent. Race exacerbates the pay gap with Black women only earning 63 cents to every dollar a man makes and Latinas make just 60 cents.

In 2017, the gender pay gap resulted in $13.7 billion in lost earnings for women in West Virginia.

The pay gap continues to impact women after they leave the workforce as women are more likely to live in poverty in retirement. Because of lower lifetime earnings, the average Social Security benefit for women 65 and older is around $14,044 per year compared with $18,173 for men at the same age.

While the pay gap has lessened over the last few decades because more women earned bachelor’s degrees and found employment in managerial or professional occupations, policymakers must take action to ensure the gap continues to close.