Last month the Tax Foundation released the 2012 edition of their State Business Tax Climate Index, a measure of how business-friendly a state’s tax system is. The overall index is comprised of 5 sub-indexes, measuring the “business-friendliness” of a state’s corporate income, individual income, sales, property, and unemployment insurance taxes. This year, West Virginia ranked 23rd, with an overall score of 5.19 (higher scores being better business). (Interesting side note, despite the “job-killing” rhetoric around West Virginia’s business personal property tax and the $300 million tax incentives to counteract it, according to the Tax Foundation, West Virginia’s property taxes are more business friendly than both Ohio’s and Pennsylvania’s.)

I’ve looked at these business tax climate rankings before, and suggested that a good business tax climate doesn’t necessarily lead to a good economy. This time I’ll take a closer look at the Tax Foundation’s scores to see how much they really do matter. The next four charts compare total nonfarm employment growth in each state with the state’s Business Tax Climate Index Score in FY 2009, FY 2010, FY 2011, and the first half of FY 2012. 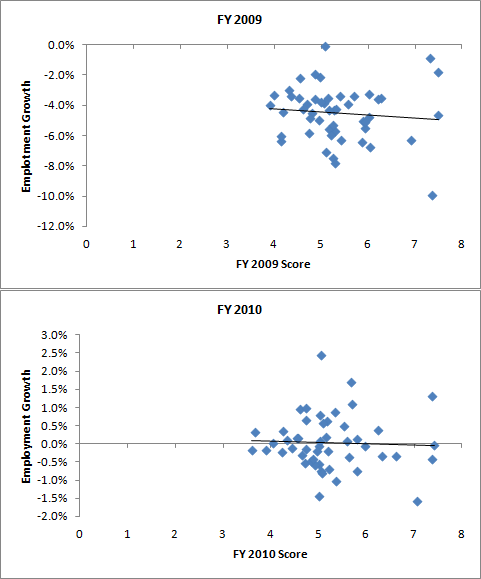 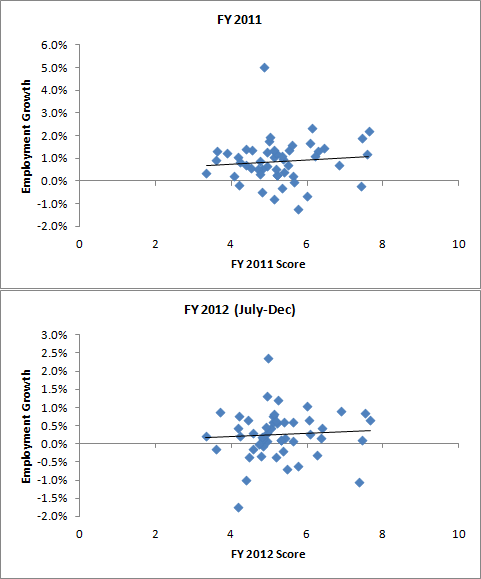 Sources: Tax Foundation and BLS data
As the charts show, for each of the past four years, there has been no obvious connection between a state’s business tax climate and employment growth. In fact, in the year with the strongest correlation between business tax climate and employment growth, FY 2009, the relationship was negative, with a correlation coefficient of -0.10.
The Tax Foundation contends that a state’s tax climate does matter to growth, and that their index is able to predict growth, pointing to a study from Kansas that looks at various tax climate indexes. However the findings of the report aren’t actually a ringing endorsement for Tax Foundation or any other tax climate, stating, “None of the business climate indexes can explain a large proportion of the variation in growth across counties. The best performing business climate indexes explained at most 5% of the variation in relative growth at the borders, suggesting that most of the variation in economic performance is due to factors not captured by state-level business climate measures. This would seem to suggest that business climate is unimportant in driving relative growth among the states.“
So if the Tax Foundations index can’t explain employment growth, both according to my charts and their own citations, does improving a state’s tax climate matter. This next chart compares changes in state scores with employment growth between FY 2009 and the first half of FY 2012. 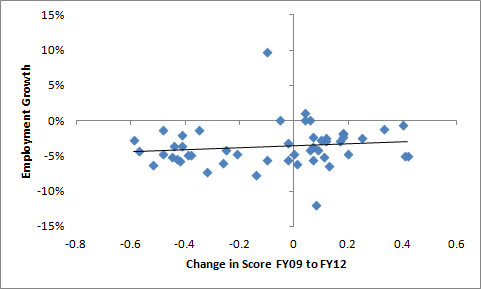 Sources: Tax Foundation and BLS data
Again, there is no obvious connection between improvement in a state’s score and employment growth. In fact the state that had the biggest improvement in score, Washington, had worse employment growth than the state with the biggest decline in score, Virginia. And while North Dakota had the biggest employment growth, their score slightly declined, while the state with the worst employment performance, Nevada, saw their score increase.
So what about some other measure of economic strength and performance? Again the answer is the same. The following charts show no obvious connection between a state’s Business Tax Climate Score and median wages, GSP per worker, or unemployment rate for the most recent years available. 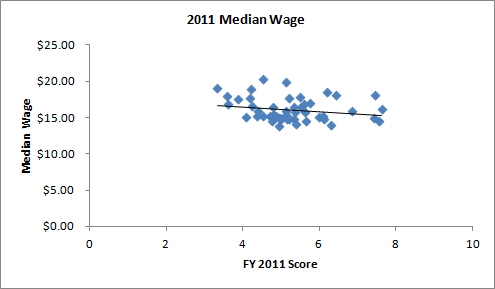 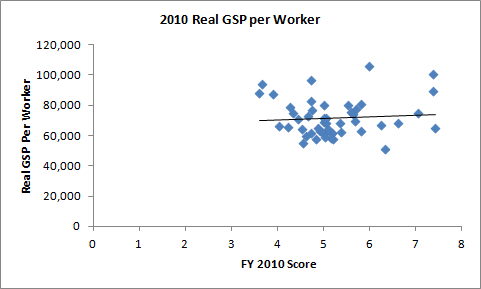 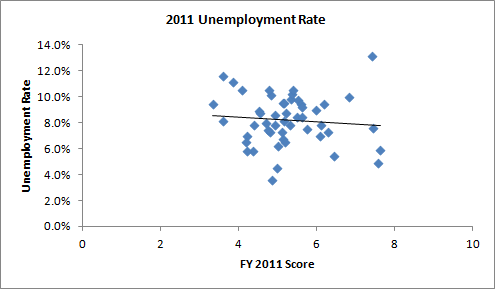 Sources: Tax Foundation, BEA, and BLS data
If you’ve read the blog before, you know what comes next. States with good business climates are those with high quality public services, a 21st century infrastructure, and quality schools and colleges that produce a skilled and well-trained workforce.