The Census Bureau released the 2014 American Community Survey (ACS) this week, which contains data on poverty, income, and health insurance coverage for all 50 states. For West Virginia, the data release had both some really good and some not-so-good news.

The Affordable Care Act is largely responsible for the decline in West Virginia’s uninsured population. As part of the Affordable Care Act, Medicaid was expanded to people making up to just $32,500 per year for a family of four (138 percent of the federal poverty rate). The Supreme Court, however, left it up to the states to decide whether to extend their benefits to these families and accept the federal funding to do so. In May of 2013, Governor Tomblin decided to expand West Virginia’s Medicaid program, and as of June 2015, more than 164,000 newly eligible West Virginians are receiving health insurance through expansion.

Other provisions of health care reform are also helping reduce the number of West Virginians without health insurance. 33,000 West Virginians have enrolled in health care plans through the state’s new health insurance marketplace, which allows people to easily compare prices and benefits of health care plans. Many of these people receive federal subsidies to help them pay their premiums and reduce their out-of-pocket health costs.

The expansion of health insurance largely benefits low-income working families. Children under 18 and West Virginians participating in the labor force made up more than 2/3rds of the decline in the uninsured population.

It wasn’t all good news for West Virginia from the Census Bureau, however. While the data release from the ACS showed significant progress in insurance coverage, the state is not seeing any progress in reducing poverty. The state’s poverty rate in 2014 was 18.3%, essentially unchanged from 2013 and still above its pre-recession levels. One in four children in West Virginia lives in poverty. In addition, the state’s median household income hasn’t budged since the recession, and at $41,059, is the 2nd lowest among the 50 states.

But just like policies such as the Affordable Care Act made a difference in the state’s uninsured rate, theyy can make a difference when it comes to poverty. Enacting a pro-work state earned income tax credit would open the doors of opportunity for people at low-wage jobs by letting them keep more of what they earn to help pay for things that allow them to keep working, such as child care and transportation. This will help build a more secure future for these families – including their kids – while boosting local economies across the state. In contrast, proposals to cut taxes for the wealthy and businesses would close the doors of opportunity, taking away resources from services families rely on every day without boosting the economy or creating jobs. 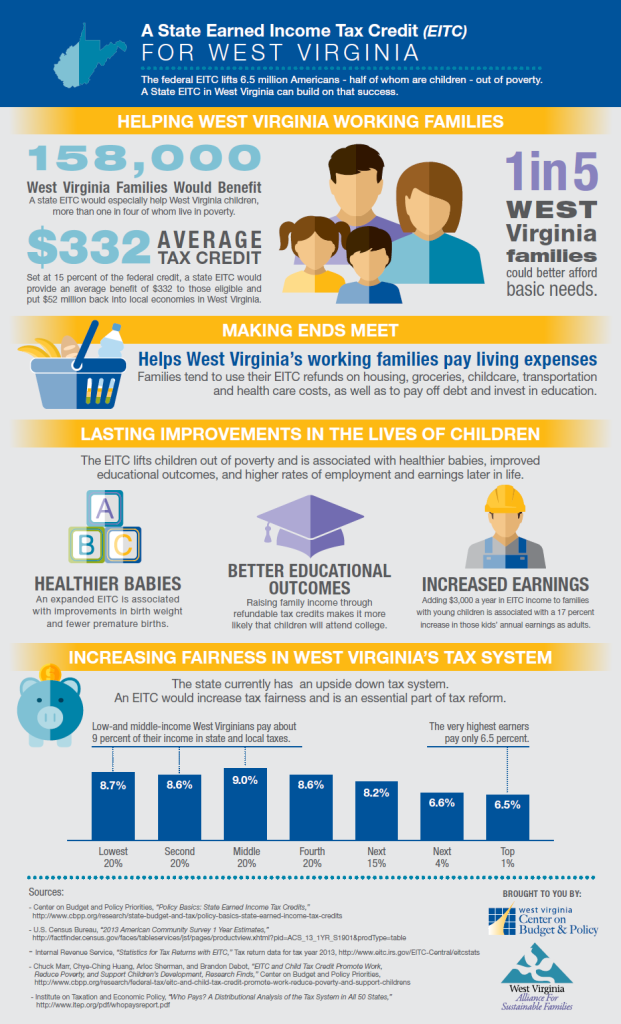