Can WV Afford to Not Increase the Natural Gas Severance Tax?

Earlier this month, this blog post examined the impact of the booms and busts of the natural gas industry in the counties where it is most active, using some broad economic metrics. As it showed, despite producing billions of dollars in natural gas during the recent boom in production, there hasn’t been a significant impact on jobs, incomes, and population. In fact, one of the only places where one can clearly see an impact from natural gas production is in the severance tax.

As we’ve covered before, the severance tax is one of the most effective ways to ensure West Virginia benefits from its natural resource wealth. As a low-income state that is rich in natural resources, the revenue collected through the severance tax on resources like coal and natural gas plays an important role in funding education, health care, infrastructure, and other services provided at the state and local level.

Would an increase in the severance tax destroy the gas industry? As the booms and bust update post showed, natural gas production has been growing by leaps and bounds in West Virginia, from 223 million mcf in 2006 to 1.4 billion mcf in 2016, a 520 percent increase. And data from the U.S. Energy Information Agency shows production likely to top $1.5 billion mcf in 2017. At the same time, prices have been volatile, but mostly have fallen, plummeting from $8.69/btu in 2006 to under $2.00/btu throughout 2016. 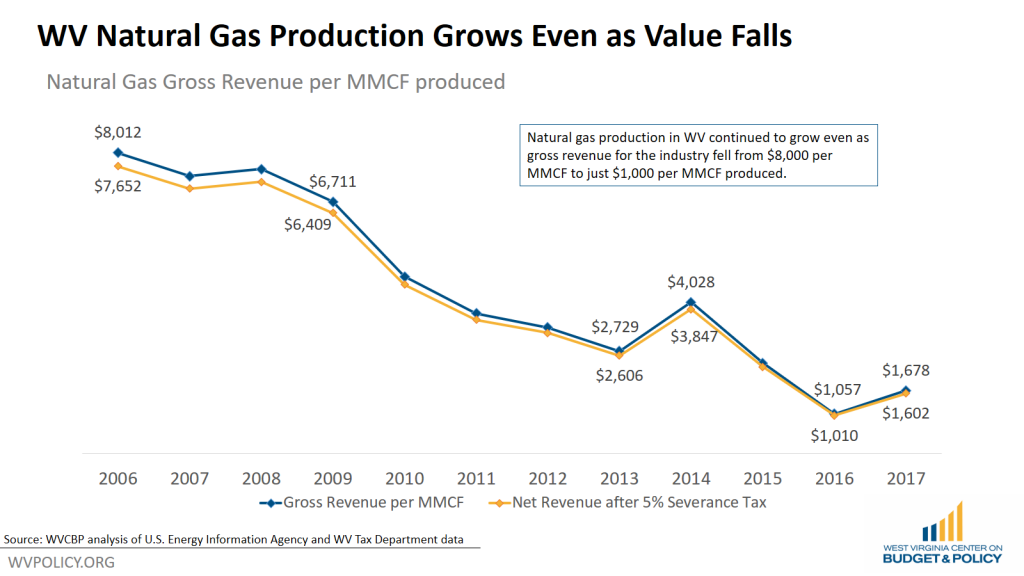 Despite that crash in the value of natural gas produced, production has increased every year in WV. Even between 2014 and 2016, when the value fell by 300 percent, production increased by 48 percent. 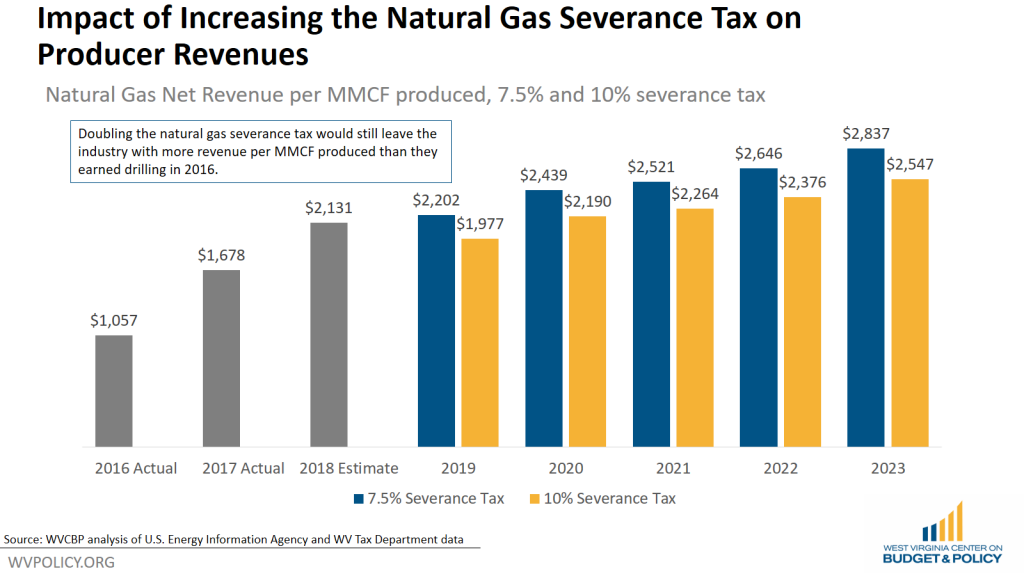 Even a modest increase to 7.5 percent, while leaving plenty for the industry, would have a big impact on the state’s finances. Increasing the severance tax rate to 7.5 percent would increase severance tax revenue by $93 million in 2019, and at total $585 million from 2019 to 2023. Increasing the rate to 10 percent would have an even bigger impact, increasing revenue by $186 million in 2019, and a total of $1.17 billion from 2019 to 2023. And the increase in the severance tax would leave natural gas producers with no less than $1,977 per MMCF produced, which again, is well above the amount the received in 2016, when they continued to increase production.