Earlier this month, the Congressional Budget Office released its latest budget update. According to the CBO, the federal budget deficit is falling, and falling fast. The federal deficit is estimated to be $642 billion this year, its smallest amount since 2008. That will be about 4.0% of GDP, compared to 10.1% in 2009. Projected deficits have also shrunk dramatically , with the 10-year deficit  $600 billion smaller than the CBO’s February projection. While debt and deficits are falling in the short term, they began rising again in the long term, due to an aging population and health care costs.

What is the cause for the falling deficits? Revenues are rising as the economy slowly recovers. Also having an impact is the $2.3 trillion in deficit savings that have been legislated recently, including the sequester, most of which has been achieved through spending cuts.

So we have clearly done more than enough to stabilize and reduce the deficits and debt for the next decade. But are we doing too much? According to many economists we are, and all of this deficit reduction is slowing down the recovery. Both private sector and government economists estimate that the unemployment rate would probably be nearly a point lower, about 6.5 percent, and economic growth almost two points higher this year if we had not raised taxes and cut spending since 2011 in the name of deficit reduction.

While cutting spending and raising taxes has succeeded in shrinking the budget deficit, it has failed in reducing the jobs deficit. While the economy has been growing, it has been growing much slower than it needs to be to fully recover from the recession. The jobs deficit, or the number of jobs needed to get back to pre-recession employment levels, adjusting for population growth, stands at 9.8 million jobs. Even as the economy continues to add jobs, the pace is just enough to keep up with population growth, and the jobs deficit remains high. 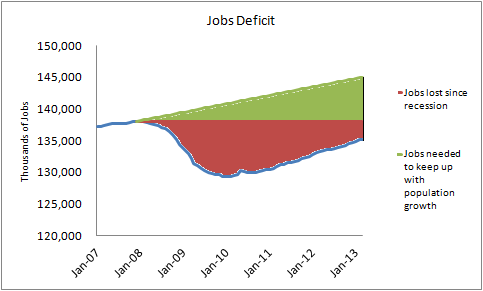 With nearly 10 million jobs missing from the economy, and spending cuts and tax increases contributing to the problem, maybe it is time policymakers switch their deficit reduction targets from budgets to jobs.