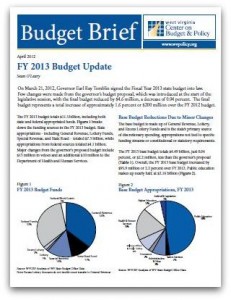 The FY 2013 budget passed by the state legislature contained few changes to what the governor proposed, differing by just $4.6 million, a decrease of 0.04 percent. The final budget represents a total increase of approximately 1.6 percent or $200 million over the FY 2012 budget. Read a complete analysis, including areas that received a governor veto and bills having a fiscal impact, here: FY 2013 Budget Update