West Virginia’s economy is recovering from the Great Recession but low- and middle-income workers not are seeing similar growth in their paychecks, according to the annual State of Working West Virginia, released this week, by the American Friends Service Committee and the WVCBP.

Incomes remain stagnant for many West Virginia workers unless they are high-wage earners. Additionally, the report describes how the state’s energy economy is shifting northward, toward the booming natural gas industry, while in the south coal production continues its decline. 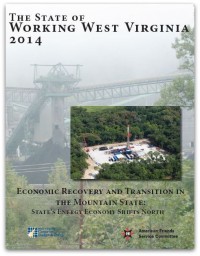 Save the Date! Summit on Race Matters in Appalachia Coming to Charleston

Mark your calendars today for the Summit on Race Matters in Appalachia, taking place November 10 & 11 in Charleston. The event will include a screening of Cracking the Codes: The System of Racial Inequity and two nationally reknowned keynote speakers.

Look for registration information in next week’s Budget Beat!

At the end of the year, Perry Bryant, Executive Director of West Virginians for Affordable Health Care plans to retire. The WVCBP has worked closely with Perry over the years on many health-related policy issues and West Virginia has been lucky to have Perry here working on behalf of all of us who have the right to affordable, accessible health care. Happy Retirement to Perry! Read more about his career and accomplishment in this week’s Daily Mail.

ICYMI – check out this op-ed by WVCBP president Renate Pore on an interesting initiative coming to Kanawha County, Choosing Wisely, which promises to contain health care costs while improving care

Share Your Comments on Building a System for Early Success

The West Virginia Early Childhood Planning Task Force has released a draft of its Development Plan for Early Childhood in West Virginia. The public is encouraged to submit comments on the report by October 12 to jenny@terzettocreative.org or Terzetto Creative, PO Box 188, Barboursville, WV 25504.

Here is some background on the Task Force from the report’s introduction:

Recognizing the importance of the earliest years of life, Governor Earl Ray Tomblin created the Early Childhood Planning Task Force in May 2013. The Task Force was charged with creating a development plan for West Virginia’s early childhood system. A 10-year plan for improving early childhood programs, financing and governance was completed in September 2014.

The Task Force partnered with the state’s Early Childhood Advisory Council on the creation of the plan. More than 1,200 West Virginians provided input through community forums, stakeholder discussions, study groups, an online survey and key informant interviews. The ultimate goal is for more pregnant women, young children and their families to receive the services they need and want. Our litmus test for the recommendations included in the plan was, “Will this work for the children we love and for the children in our state who are the most vulnerable?”