West Virginia’s historic election last week will mean a change in leadership in both the Senate and House, and likely new policy priorities for both. GOP control will mean new perspectives on state tax and budget issues. With more on what we might expect during the 2015 Legislative Session and beyond, here is Ted’s recap of new potential legislative priorities we’ll be watching for.

Business tax cuts have reduced the amount of revenue coming into the state budget, forcing decreased funding to higher education and other important programs. The natural gas boom and the increase in severance taxes it created, however, are filling some of the budget gap caused by these cuts. Sean’s blog post explains how this new-found revenue only masks the impact of tax cuts and whether or not they are really keeping their promise to increase economic development.

Want to end poverty? Give low-income people money. This might sound like a simple, perhaps crazy, idea, but it nearly became law in the 1970’s. Here’s how it would work.

Summit on Race Matters in Appalachia

Over 200 people attended this week’s Summit on Race Matters in Appalachia, a two-day event taking place in Charleston. Here’s a recap in the Charleston Gazette and an op-ed from Reverend Ron English who was a leader in making the event a reality. 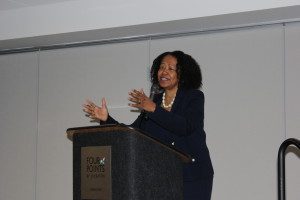 Dr. Gail Christopher with the Kellogg Foundation, keynote speaker at the Summit on Race Matters in Appalachia, 11/11/14. Photo by Beth Spence.

If you were unable to attend but want to be involved in future events, please email Linda to be added to our list.

You can also catch much of the event, filmed by West Virginia Public Broadcasting. Here are clips:

Thank you to all who attended and made the event a success!

This week saw international momentum in the push to reduce global CO2 emissions. Is it possible for West Virginia to jump on the band wagon? Improving energy efficiency and expanding use of renewable energy sources are two options the state has available, if the political will to enact them is there. For a full analysis, here is more from West Virginia Public Broadcasting.