In reversing course, the governor and legislators responded to pressure from the Our Children Our Future Coalition. Ted Boettner and Jim McKay authored this oped which appeared in last Sunday’s Charleston Gazette Mail. And the coalition gathered at the Capitol on Tuesday with families and workers who would be affected by the cuts. Here’s more from West Virginia Public Broadcasting. 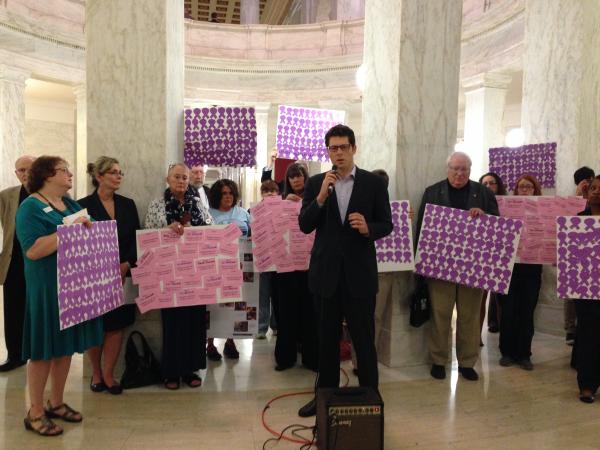 Our Children Our Future Rally on May 20, 2014
(photo from West Virginia Public Broadcasting).

“Our democracy is working. Kids and families made their voices heard, and lawmakers from both sides of the aisle listened,” said Stephen Smith, Executive Director of the West Virginia Healthy Kids and Families Coalition. “We congratulate House and Senate leadership for finding a way to make this investment in our state’s future. Governor Tomblin has worked hard with his cabinet secretaries, law enforcement, advocates, and lawmakers to vet these programs. The research speaks for itself: we cannot afford to turn away $14 million in leveraged funds; we can’t afford to lose 80 jobs.”

Also while in town this week for interims, the legislature passed HB 201, which allows businesses to continue to use alternative methods of calculating overtime for eligible employees under federal law, while preserving the increase in the state’s minimum wage. HB 4283, passed during the regular session, increases the state’s minimum wage to $8.75 by 2016 for all employers in the state.

In West Virginia, as in other states, low-income workers pay a higher percentage of their wages in taxes than do high wage earners. A state Earned Income Tax Credit (EITC) would create a greater balance, giving a tax reduction to low-income workers. West Virginia should model its EITC after the federal program which has been around since 1975 and has raised millions out of poverty. Read more details in Sean’s blog post.

If you were impacted by the January 9 chemical spill into the Elk River, now is your chance to tell Governor Tomblin how you think the state reacted to the emergency. You can still respond to this survey until Monday, May 26.