Now that the recession is in the past, most states are restoring funding to higher education. West Virginia, however, is still reducing funding, second only to Wyoming, spending 21.6% less per student in FY 2014 than in FY2008, a reduction of over $1,800.

Read more in “States Are Still Funding Higher Education Below Pre-Recession Levels”, released this week by the Center on Budget and Policy Priorities, and Sean’s blog post.

Because of the hundreds of millions it gave away in tax cuts, the state has had to cut back the money it gives to the state’s colleges and universities. In fact, West Virginia gave away more than enough in tax cuts to have provided free instate tuition at all the state’s colleges and universities. Instead, students and their families are paying more in tuition because of funding cuts. 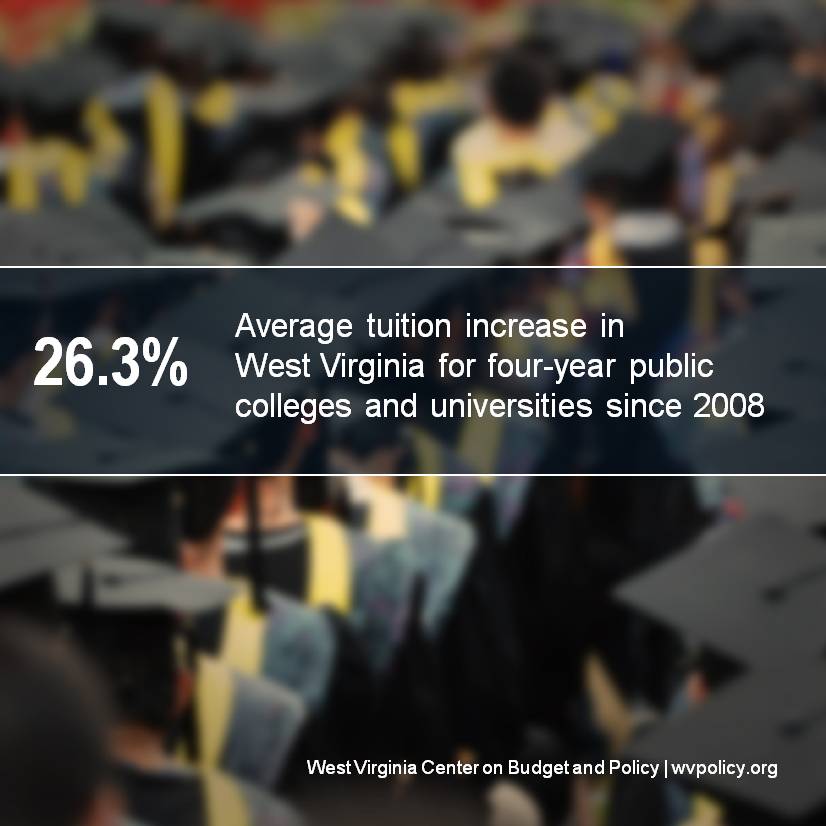 As Social Security gears up for more Baby Boomers to begin collecting benefits, policymakers are looking at ways to close any possible budget shortfalls in the program. According to the Center for Economic and Policy Research, one idea is to eliminate the Social Security Payroll tax cap. Right now, the caps stands at $117,000 a year. In other words, someone making $234,000, or twice the cap, pays the tax on only half of those earnings. In West Virginia, scraping the cap would affect 25,073 employees or 3.2% of the state’s workers.

On March 23, Governor Tomblin used his line-item veto power to cut over $1 million from In-Home Family Education, Family Resource Networks and Starting Points Family Resource Centers, Child Advocacy Centers, domestic violence programs and services, and child abuse prevention. Many of these programs saw cuts in prior years or have not had any funding increases for years, while the cost of services and the increase in the number of families needing assistance has continued to rise, making it impossible to serve as many families and children.

On May 20, families, religious leaders, lawmakers from both parties, and community groups will join together at the state Capitol, when there is likely to be a special session of the legislation, to make one final push for these essential programs.

“This event will either be a celebration or a call to action,” said Stephen Smith with the WV Healthy Kids and Families Coalition, one of the groups involved with the Our Children, Our Future Campaign.”We hope that by then legislators and the governor will have worked together to find a solution, but if not, we will be ready to strongly make our case one last time.”

For more information, visit www.ourchildrenourbudget.eventbrite.com or contact Stephen Smith at ssmith@wvhealthykids.org or 304.610.6512.