Children’s Day at the Capitol

The WVCBP was a proud cosponsor of Children’s Day at the Capitol this week. Hundreds of children from around the state turned out to lobby legislators as part of the Our Children, Our Future campaign. Here are two of them checking out our booth. 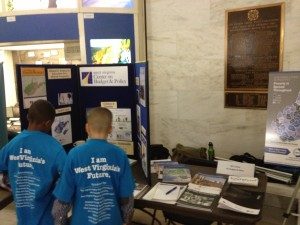 On Wednesday, Ted presented to the Senate Select Committee on Children and Poverty. Watch his presentation here or read it here. On Thursday, West Virginia Public Broadcasting reported on the committee’s meeting.

This week Ted blogged about the impact of The Sequester to West Virginia. His post also pointed out that Medicaid Expansion would provide health insurance to one-third of the 11,000 veterans who currently are without coverage.

The issue of children in poverty was in the news leading up to Children’s Day. The Charleston Gazette ran an editorial citing data from the WVCBP report released last week.

Ted was quoted in a Charleston Gazette article this week discussing how changes to the way Social Security cost of living adjustments (COLAs) are calculated should be carefully considered. Groups such as the AARP are against changing how COLAs are determined.

This week Governor Tomblin requested the introduction of a bill to require sales tax on Internet purchases. HB 2754 would impose West Virginia’s six percent sales tax on out-of-state retailers who have a business presence in the state, as Amazon does with its warehouse in Huntington. Such a measure would “modernize our sales tax and treat all businesses the same” as Ted mentioned late last year in this Charleston Gazette article.