One of the WVCBP policy priorities for the 2015 Legislative Session is passage of legislation for paid sick days for West Virginia workers. Currently, over 225,000 workers cannot take a paid day off if they are sick. This has far-reaching impacts for West Virginia families and their communities, including spreading of viruses like this year’s flu. Read more in Erin’s blog post. 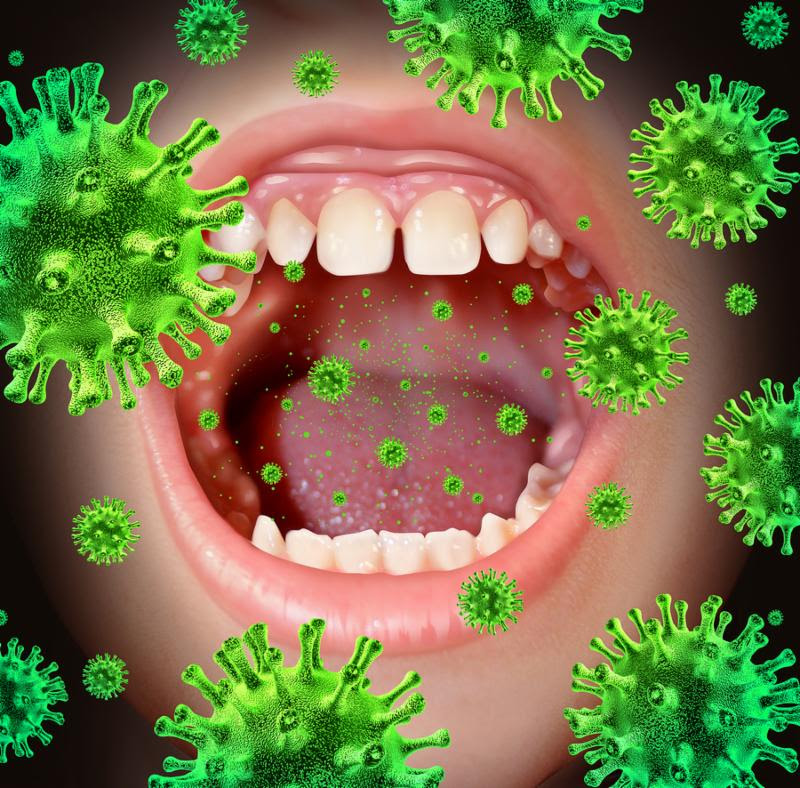 Contagious disease transmitting a virus infection with an open human mouth spreading dangerous infectious germs and bacteria while coughing during a cold or flu symptoms.

The new Senate leadership is talking about reforming the state’s prevailing wage which ensures secure earnings for construction workers on state projects. Sean explains how the math behind the argument calling for repealing the wage does not add up in this blog post.

It’s important to note that Virginia, used as a model by those wanting to end the prevailing wage, actually has higher construction costs than West Virginia, which Sean explains here.

The WVCBP’s focus will also remain on the most important bill that will be passed during the upcoming session: the state budget. Last week, Governor Tomblin announced that the business franchise tax would be fully eliminated on January 1. As explained in Ted’s blog post, there is little evidence that this cut will bring jobs to the state. In fact, the state’s budget shortfalls were closely reviewed during West Virginia’s bond rating review, along with the fact that legislators had to dip into the Rainy Day fund to balance the budget. Despite these concerns, however, the state was able to hold on to its high rating.

Budget Breakfast Right Around the Corner

Join us for the next Budget Breakfast on Wednesday, January 21 at the Four Points Sheraton, downtown Charleston. Please register to hold your seat for our annual event which includes a buffet breakfast.

Panelists include legislators and a member of Governor Tomblin’s cabinet. The morning will also include a presentation on the new state budget by WVCBP Executive Director Ted Boettner. 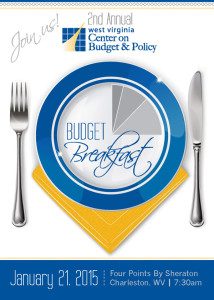 When/Where: January 9, 2015, events from 3 p.m. until 9 p.m. in and around the WV Culture Center on the State Capitol Grounds. All events are free of charge and open to the public.

3-5 p.m. Citizen Education Workshops at the WV Culture Center. Two 2-hour free workshops sponsored by the WV Rivers Coalition that will inform everyone about clean water issues and give them the tools and support to get involved.

6:30 -7:15 p.m. Honoring the Waters Interfaith Vigil
One-Year Anniversary Candlelight Vigil at the Kanawha River in front of the WV State Capitol. Be prepared for cold weather, dress in layers!

7:30-8 p.m. Reception with Impacted Residents and Music In the WV Culture Center.

8-9 p.m. Screening of Elk River Blues Documentary
A world premiere of the documentary film by Mike Youngren features West Virginians’ response to systemic failures that continue to threaten our water. Film sponsored by the West Virginia Rivers Coalitionand the Unitarian Universalist Congregation of Charleston in the WV Culture Center Theater.

Kick off the 2015 Legislative Session with Kids at Families Day at the state Capitol on Wednesday, January 14. Join families from across the state to remind legislators that working families are important. Activities all day from 8AM – 3PM in the lower rotunda!

The City of Charleston is developing a five-year strategic plan, which will describe how to spend the federal housing and community development funds it will receive during the next five years (2015-2019). This funding must benefit low and moderate income persons. The City needs your input about how these funds will be spent.

The City is conducting a Citizen Survey through the use of a Web-based program available to all residents of the City. This survey asks residents to tell how they feel about programs relating to housing, community services, economic development, and homelessness.

The survey may be completed from a home computer or by using a computer at the public library, a church, or a community center. The survey is direct and takes only about five minutes to complete. Charleston residents are urged to complete the survey. For more information, please contact Mr. Brain King, Director, Mayor’s Office of Economic and Community Development at (304) 348-8035 ormoecd@cityofcharleston.org.