Tax Reform for the People

April 15 is right around the corner and whether you are expecting a refund or writing that check, it’s a good time to reflect on the mind-bending systems called our tax code.

The federal income tax is progressive, meaning that it doesn’t unfairly and disproportionately tax low-income people. West Virginia’s tax system is upside-down, resulting in low- and middle-income families paying a larger share of their income in taxes than those with the best ability to pay. 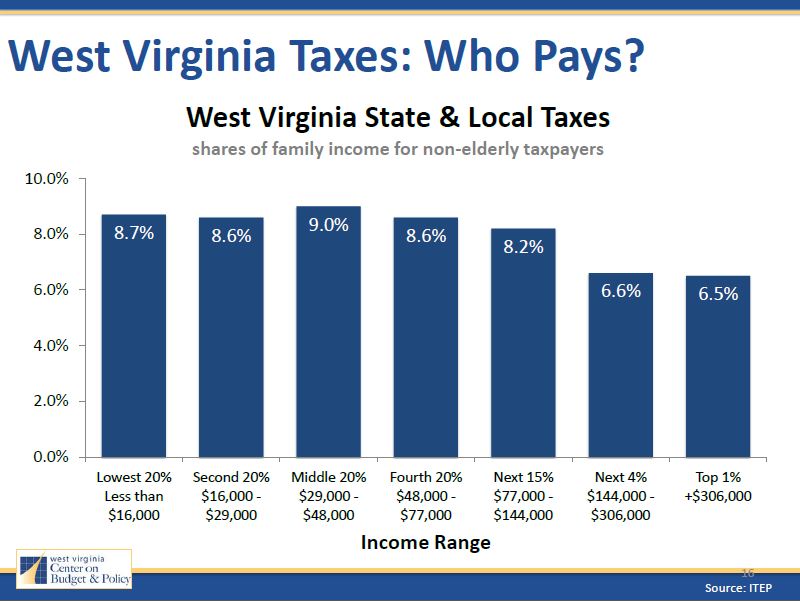 West Virginia policymakers have tackled tax reform several times, most recently by then-Governor Joe Manchin. And the Republican legislature’s newly formed Joint Select Committee on Tax Reform will hold its first meeting this Monday, April 13 at 2:00 PM in the House Chamber. We will recap that meeting in next week’s Budget Beat.

Much of the discussion surrounding tax reform usually revolves around making the state’s business climate more friendly by reducing or completely eliminating business taxes. In fact, over the past 10 years, West Virginia has moved from 34th to 21st in its business tax ranking after cutting the corporate income tax and phasing out the business franchise tax. While these tax cuts have cost the budget millions each year, they have failed to bring jobs to the state. In fact, West Virginia has lost nearly 28,000 jobs during that same time period. 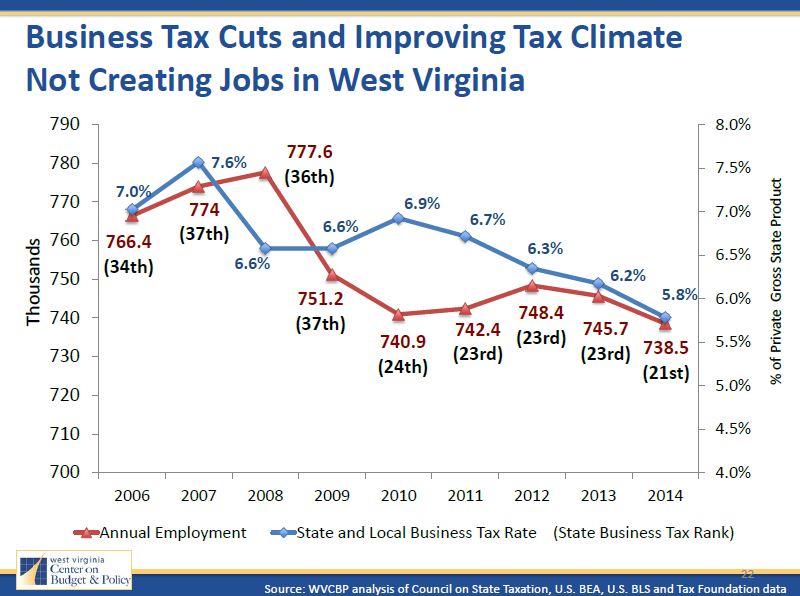 For lots of ideas on how tax reform can be structured to benefit West Virginia’s working families, instead of corporations, check out our recommendations in this year’s report on the state budget.

Another annual ranking is Rich States, Poor States complied by the American Legislative Exchange Council (ALEC). This year West Virginia fell six spots on this index which looks at tax rates and regulation. Here’s an interview on yesterday’s West Virginia Metro News with one of the report’s authors.

For a complete debunking of the ALEC index, check out this report by Good Jobs First which shows that, in reality, the less a state conformed with ALEC policies the better off it was. 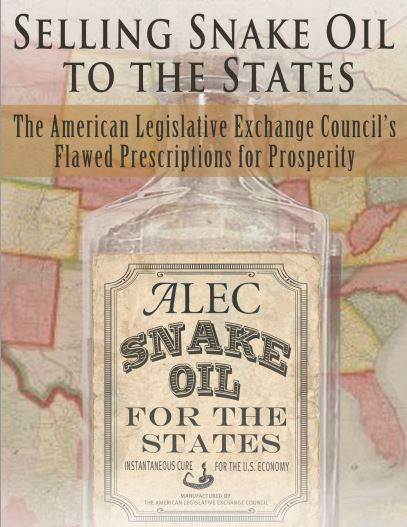 Every year the Tax Foundation releases a report on Tax Freedom Day which it describes as the day when “the nation as a whole has earned enough money to pay its total tax bill for the year.” The Center on Budget and Policy Priorities recently published a report debunking the concept, however, stating “few Americans would likely feel more ‘free’ if Tax Freedom Day came earlier in the year because the federal government stopped providing for national security, ensuring homeland security, conducting food safety inspections, or testing prescription drugs.”

Senator Joe Manchin joined five other Democrats to co-sponsor an amendment to the Senate budget bill that would have expanded Social Security benefits. The amendment was ultimately defeated with a 42-56 vote. According to the AARP, one in four West Virginians receives Social Security which provides $9.5 billion in economic output for the state at a rate of $1.61 for every $1 received.