On the eve of the Marcellus Shale boom, we at the West Virginia Center on Budget Policy released a report on the economic boom and bust cycles of West Virginia’s natural resource extraction economy. AS the report showed, counties in West Virginia with high concentrations of mining employment were particularly affected by the boom and bust cycle, as production grows and shrinks, energy prices rise and fall, and the resources themselves are depleted over time. And while, communities can rely on energy development for economic growth in the short-term, the boom is unsustainable. If trends hold, the boom ultimately leads to a bust, followed by decades of underperformance.

The report, which was published in 2011, ended with a note that the pattern is likely to repeat itself in counties that focus heavily on the Marcellus Shale development. Since then natural gas production has exploded in West Virginia, increasing from 297.9 million mcf in 2010 to 1.4 billion mcf in 2016. 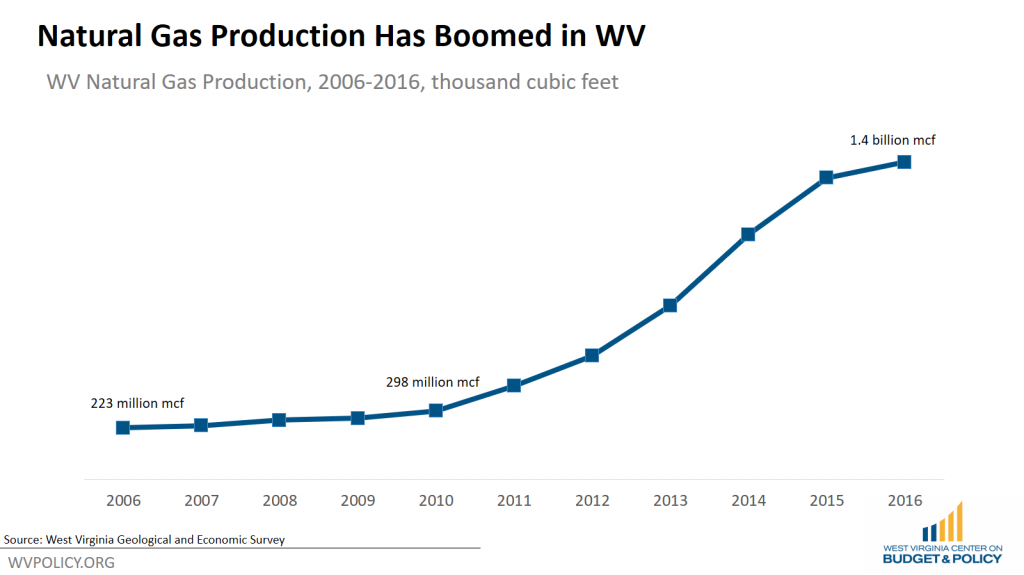 The boom in natural gas production has been concentrated in a handful of counties in West Virginia. In 2016, 6 counties (Doddridge, Wetzel, Marshall, Ritchie, Harrison, and Tyler) accounted for over 77 percent of the natural gas produced in the state, with each producing over 120 million mcf of natural gas that year. 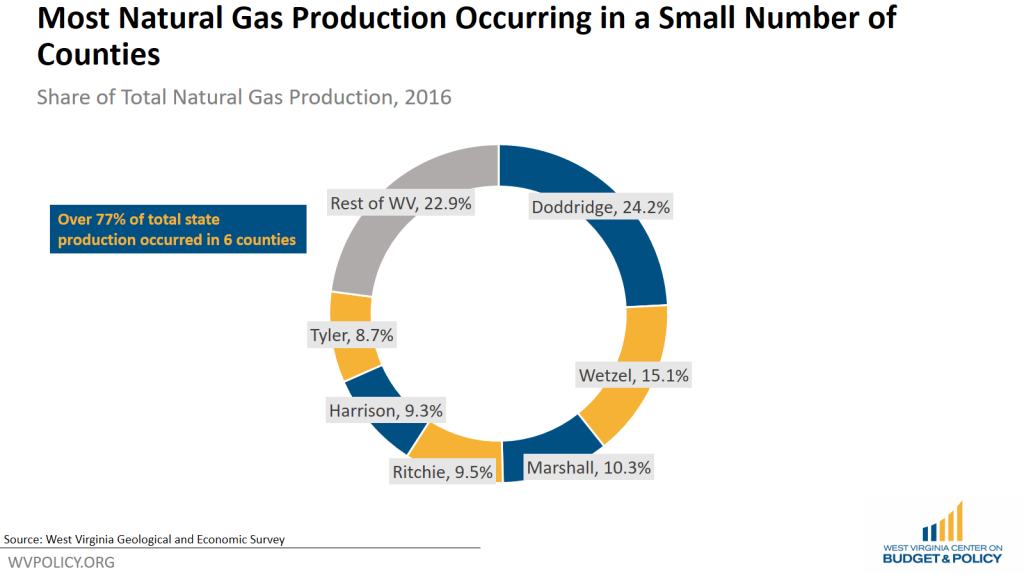 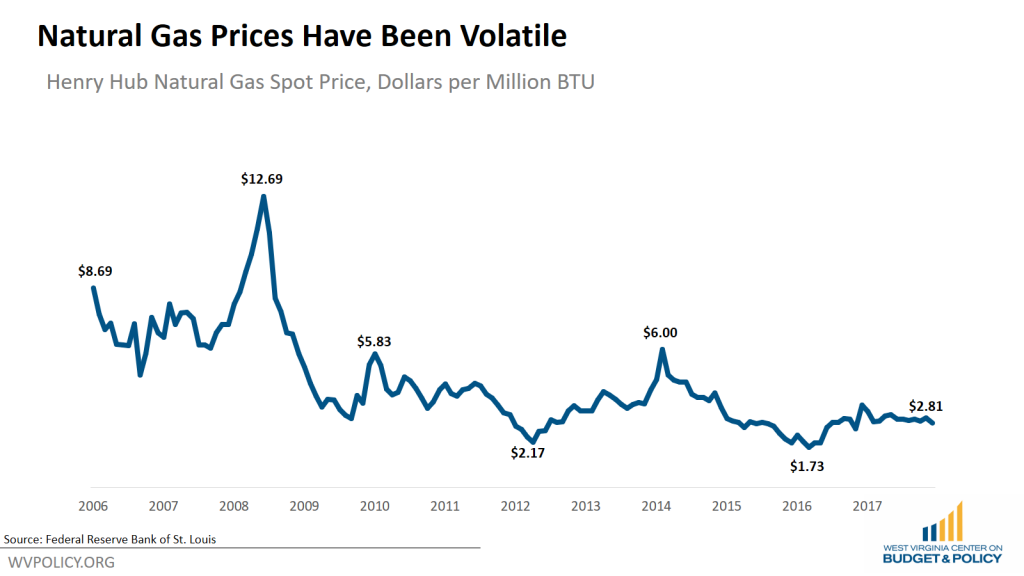 Using the same economic indicators as the “Booms and Busts” report (total earnings, total personal income, employment, and population) a clear boom and bust pattern can be found in West Virginia’s top gas producing counties. And while the original report on the state’s mining counties found a boom and bust pattern stretching over decades, the pattern is accelerated for the gas counties and is strongly influenced by the volatile price of natural gas. 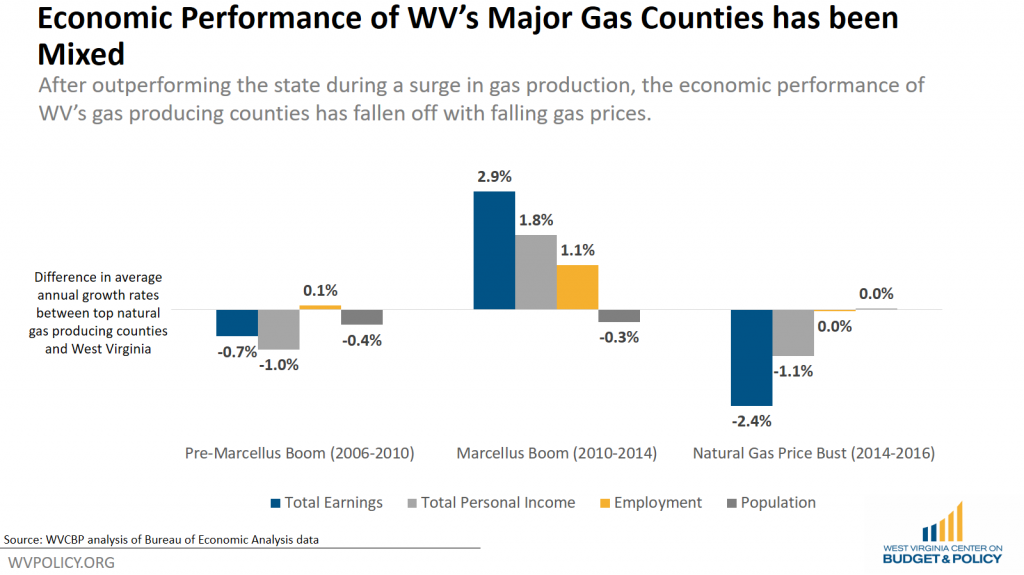 In the years leading up to the natural gas boom, West Virginia’s natural gas producing counties experienced relatively slower growth than the state as a whole, trailing in earnings, income, and population growth, while experiencing slightly higher employment growth. During the initial boom in natural gas production, starting in 2010, the gas counties saw much faster rates of growth in earnings, income, and employment, but still saw less growth in population (in fact losing population). But when natural gas prices began to fall in 2014, the economic boom busted, and the counties began to experience slower earnings and income growth, with no better employment and population growth than the state average. 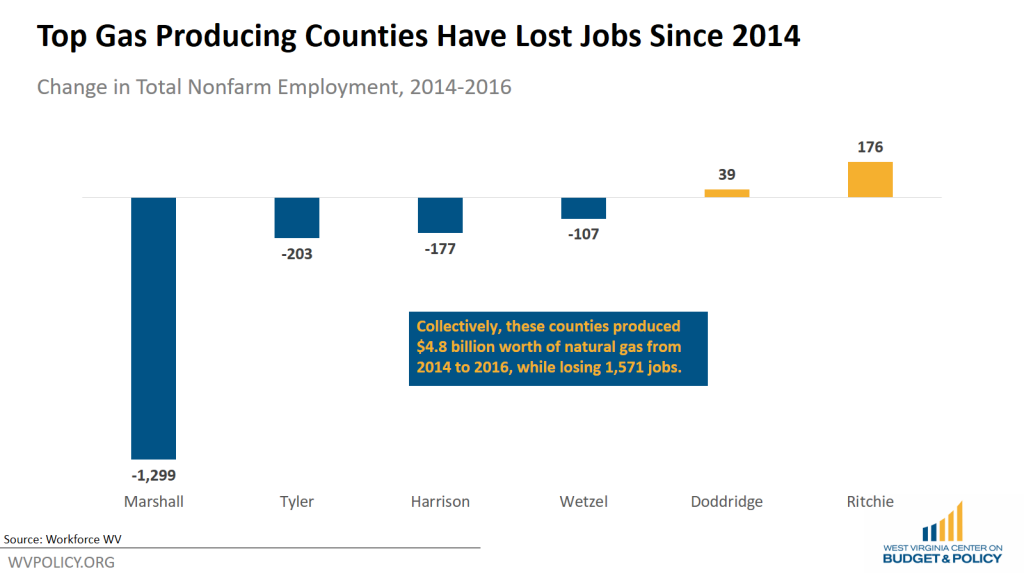 In the past, West Virginia saw its mining counties surge ahead and then under-perform during a decades long boom/bust cycle that left those counties economically weaker and ill-positioned for sustainable growth. That pattern has shown itself again in the state’s natural gas counties, only the economic boom happened over a much shorter span of time, with the bust coming much quicker, with the fortunes of the natural gas counties tied to the volatile price of natural gas. Several years into the state’s natural gas production boom, these counties have produced billions of dollars worth of natural gas, with little to show for it.