The first hydraulically fractured shale wells were drilled in Pennsylvania and West Virginia nearly a decade ago. Drawing on existing experiences in these states, and the rapid advance of hydrofracking in Ohio, we can begin to assess the effect of shale development on the most active drilling communities. As pressure mounts to increase domestic oil and gas production, and shale development continues to grow, communities anticipating a shale energy boom need to understand what to expect, how to respond, and what to avoid. Read PDF of Executive Summary. 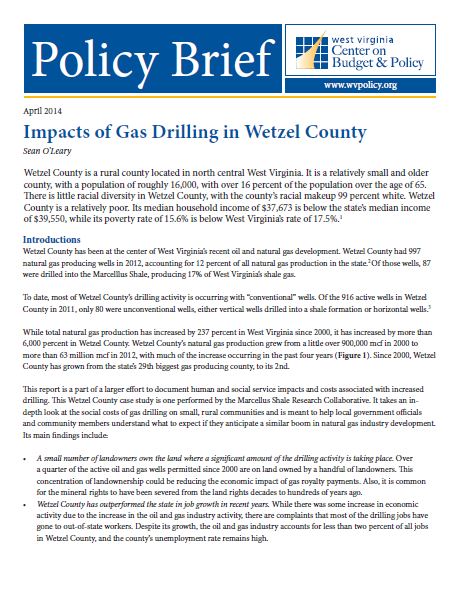 Researchers with the Multi-State Shale Research Collaborative set out to document the impact of shale drilling on the economy, community, government agencies, and human services in four counties with significant shale development – Carroll County in Ohio, Greene and Tioga counties in Pennsylvania, and Wetzel County in West Virginia. Using publicly available data, press reports, and local interviews, the collaborative has identified both the benefits and costs of drilling, and ways in which these communities have been transformed as a result.

All four counties are small, rural, and generally poorer than the state as a whole. All are experiencing shale industry development and are among the largest producers in their respective states. Their experiences have been remarkably similar: Each reported a rapid influx of out-of-state workers; few local land-use limitations were in place when drilling took off; and for the most part companies have operated independently from local government oversight. There are differences among the counties, too, particularly as the industry shifted from developing methane (dry) gas to shale oil and wet gas rich in higher-priced liquid gas products.

In Carroll, Greene, and Tioga, growth in drilling brought positive economic benefits and some new jobs as well as additional costs for police, emergency services, road damage, social services, increased rents, and a shortage of affordable housing. In Wetzel County, the story was slightly different. While the county produces 17 percent of West Virginia’s shale gas, it is home to a much larger number of conventional gas wells and better equipped to handle shale industry development. The county did report both positive and negative impacts from the growth in shale drilling, but not to the same degree as the other counties.

For instance, Wetzel did not see a boom in population or a tightening in the housing market as other counties did. Greene County is no stranger to extractive industries with its long history of coal mining and conventional gas drilling. The expansion of shale gas drilling has had positive economic benefits so far, but Greene’s first-hand knowledge of the long-term economic and environmental impacts of mineral extraction offer a cautionary tale.

In Tioga County, we found a community unprepared for the sudden overwhelming presence of the industry, with few tools to manage, let alone plan for, growth and change. Drilling brought economic benefits at the height of the boom, but those benefits proved temporary.

As the industry shifted away from Tioga to other more lucrative shale plays in Ohio, Southwestern Pennsylvania, and North Dakota, businesses closed, employment declined, and the boom ended. Carroll County is home to half of Ohio’s gas wells. Residents, businesses, and labor leaders have welcomed new jobs in the county but are concerned that the best and highest-paying jobs are going to out-of-state workers rather than local residents.

While local governments in Carroll and Wetzel saw an increase in tax revenue with more drilling, the same was not true in Greene and Tioga because of Pennsylvania’s local tax structure. The state enacted a local impact fee in 2012 that has provided local governments with new resources to mitigate some drilling impacts. Below is a summary of the key findings from each of the four case studies.

To read the case studies themselves, go to http://multistateshale.org/case-studies.

In all four counties, signing bonuses and royalties have increased the incomes of local residents and businesses benefiting from increased spending – but the economic benefits have not been shared equally or broadly

Each of the four counties reported growth in oil and gas drilling jobs, but overall shale-related employment is still a small share of total county employment.

Out-of-state oil and gas workers have created increased demand for temporary housing in Carroll, Greene, and Tioga counties. Hotels filled up and new rooms were added, but growth was not sufficient to resolve what has become a problem. This insufficient housing supply has caused rents to increase, creating challenges for many local renters, including seniors, young people, and low-income individuals and families.

In all four counties, drilling activity has increased traffic of heavy trucks carrying gravel, equipment, water, chemicals, sand, and waste. This has caused greater wear and tear on roads not designed for heavy truckloads, and increased motor vehicle accidents.

Crime data varied between the Pennsylvania communities and Wetzel County.

The risk of water contamination near well sites and drilling waste disposal were key concerns in all four counties.

Few drilling company workers brought families with them to any of the counties studied. School enrollments, for the most part, remained stable or continued to decline in all four counties.