The projected decline of Central Appalchian coal production is one of the biggest challenges facing the state in the near future. While there are many reasons for the decline, some are irreversible, as much of the easy to reach coal has been mined out. This has prompted a great deal of concern in the state, chiefly regarding the potential loss of coal mining jobs, as it is assumed that as coal production falls, so will employment.

As the table shows, mining productivity in Central Appalachia falls steadily over the next two decades. But coal production doesn’t follow the same pattern. As we’ve shown before, coal production is projected to fall sharply in the next 5-8 years and then level off for the foreseeable future. 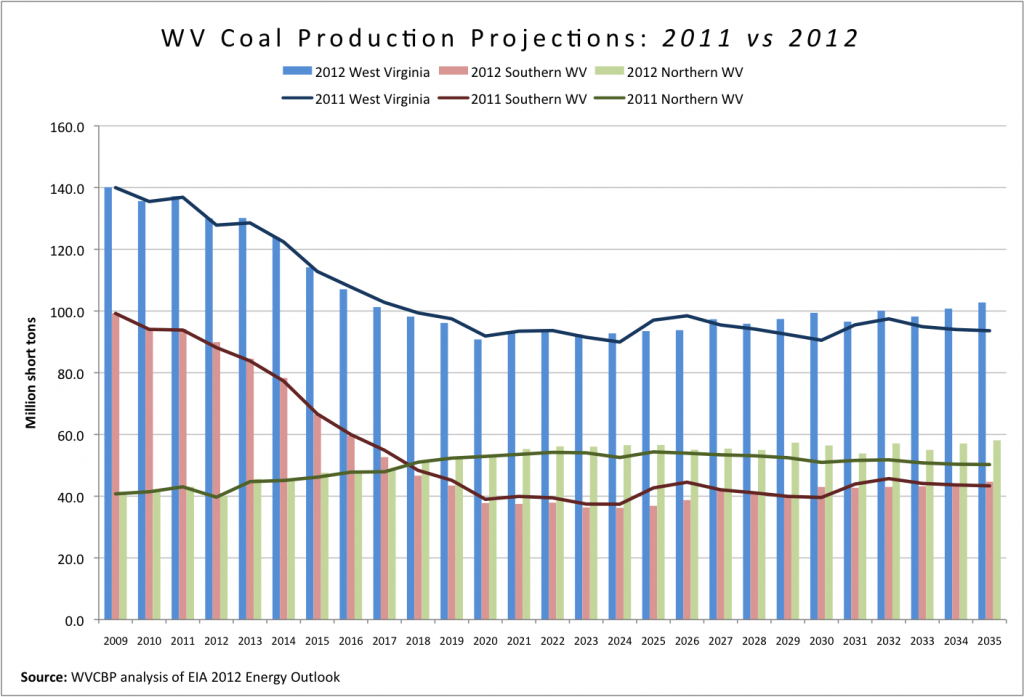 So while production remains basically flat in 2020 and beyond, productivity continues to fall, meaning that it will take more “miner hours” to mine the same amount of coal. So what does this mean for employment? We can use these two projections to make an educated guess.
According to the EIA, in 2010, total coal employment in Central Appalachia was 35,408, and those workers mined 184.44 million short tons of coal. And as I mentioned above, the EIA measured productivity as 2.27 short tons per miner hour. Doing the math, that averages out to 2,319.6 hours of mining per miner in 2010.
If we assume that each miner continues to average 2,319.6 hours of mining per year, we can reverse the calculation and estimate total employment using the projected coal production and productivty numbers, which I did below.
Central Appalachian Projected Coal Employment