Accounting for Impact: The Need for a Stronger Fiscal Note Process in West Virginia 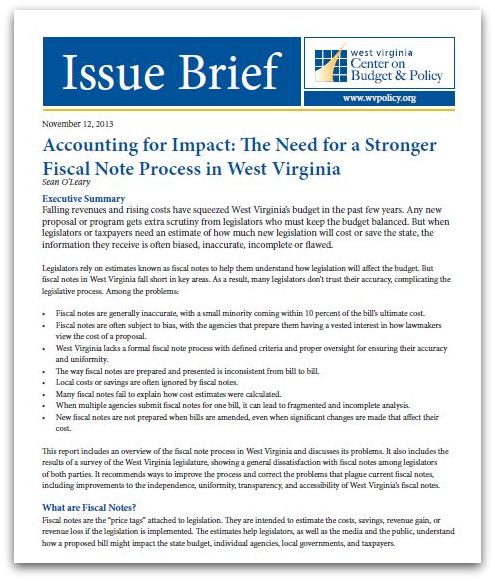 Falling revenues and rising costs have squeezed West Virginia’s budget in the past few years. Any new proposal or program gets extra scrutiny from legislators who must keep the budget balanced. But when legislators or taxpayers need an estimate of how much new legislation will cost or save the state, the information they receive is often biased, inaccurate, incomplete or flawed. Read PDF of report.

Legislators rely on estimates known as fiscal notes to help them understand how legislation will affect the budget. But fiscal notes in West Virginia fall short in key areas. As a result, many legislators don’t trust their accuracy, complicating the legislative process.

This report includes an overview of the fiscal note process in West Virginia and discusses its problems. It also includes the results of a survey of the West Virginia legislature, showing a general dissatisfaction with fiscal notes among legislators of both parties. It recommends ways to improve the process and correct the problems that plague current fiscal notes, including improvements to the independence, uniformity, transparency, and accessibility of West Virginia’s fiscal notes.