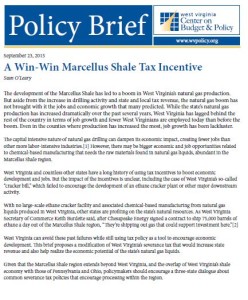 The development of the Marcellus Shale has led to a boom in West Virginia’s natural gas production. But aside from the increase in drilling activity and state and local tax revenue, the natural gas boom has not brought with it the jobs and economic growth that many predicted. While the state’s natural gas production has increased dramatically over the past several years, West Virginia has lagged behind the rest of the country in terms of job growth and fewer West Virginians are employed today than before the boom. Even in the counties where production has increased the most, job growth has been lackluster. PDF of report

The capital intensive nature of natural gas drilling can dampen its economic impact, creating fewer jobs than other more labor-intensive industries. However, there may be bigger economic and job opportunities related to chemical-based manufacturing that needs the raw materials found in natural gas liquids, abundant in the Marcellus Shale region.

West Virginia and countless other states have a long history of using tax incentives to boost economic development and jobs. But the impact of the incentives is unclear, including the case of West Virginia’s so-called “cracker bill,” which failed to encourage the development of an ethane cracker plant or other major downstream activity.

With no large-scale ethane cracker facility and associated chemical-based manufacturing from natural gas liquids produced in West Virginia, other states are profiting on the state’s natural resources. As West Virginia Secretary of Commerce Keith Burdette said, after Chesapeake Energy signed a contract to ship 75,000 barrels of ethane a day out of the Marcellus Shale region, “They’re shipping out gas that could support investment here.”

West Virginia can avoid these past failures while still using tax policy as a tool to encourage economic development. This brief proposes a modification of West Virginia’s severance tax that would increase state revenue and also help realize the economic potential of the state’s natural gas liquids.

Given that the Marcellus Shale region extends beyond West Virginia, and the overlap of West Virginia’s shale economy with those of Pennsylvania and Ohio, policymakers should encourage a three-state dialogue about common severance tax policies that encourage processing within the region.