43 States Aren’t Facing Budget Cuts, West Virginia’s Not One of Them

The National Association of Budget Officers (NASBO) has released the Fall 2013 edition of its Fiscal Survey of the States. When we last checked in on the NASBO report, West Virginia was one of eight states cutting its general budget in FY 2014 from Fy 2013, with the second largest cut among the states.

With the fall update, the budget outlook for most states has improved. Most states are experiencing revenue gains, with tax collections outperforming projections, and overall modest growth and stability. However, West Virginia is still only one of seven states that is projected to reduce its budget in FY 2014, with the 4th biggest reduction.

Why is West Virginia cutting its budget when so many other states don’t have to? West Virginia has a clear and undeniable revenue problem. To date, general revenue collections are down more than $54 million from this point last year, and are only expected to be up by about $32 million from FY 2013 when FY 2014 is over, an increase of only 0.8%. And considering that the general revenue fund saw virtually zero growth from FY 2012 to FY 2013, that’s not a good place to be at all.

So what’s the reason for our revenue problem? It can’t be easily blamed on our “sluggish economy.” Last year, West Virginia was in the top 10 among states in private sector GDP growth. 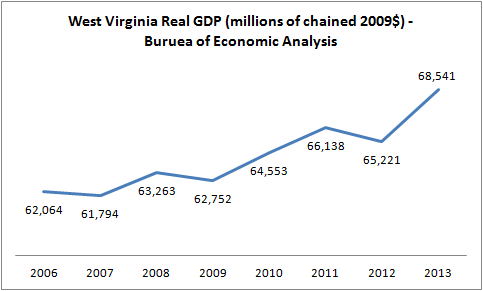 And while that growth may have occurred in FY 2012 and FY 2013, more up-to-date data do not show growth problems. Personal income growth, while slow, has been growing steadily throughout 2013, but revenue growth continues to struggle. 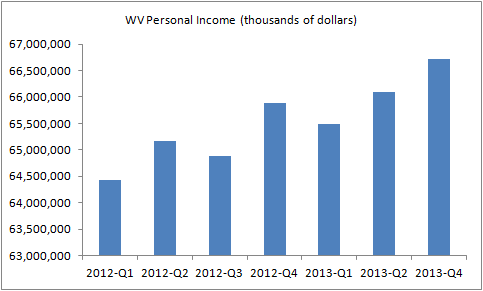 So if revenue continues to fall even as the economy grows, what could be the culprit? You guessed it, tax cuts. Recent tax cuts cost an estimated $316 million in FY 2013, and will grow even bigger by the time FY 2014 ends. And when you look at which revenue source is struggling the most, and which taxes have been cut, the conclusion becomes fairly obvious.